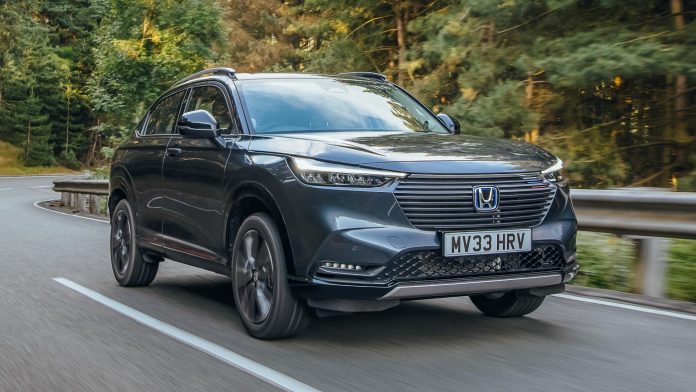 Ahead of its official European launch in “late 2021”, Honda has now revealed more information about the e:HEV hybrid powertrain underneath the bonnet of the all-new HR-V – the sole powertrain offering in the continent.

Just like our Honda City R.S., the Honda HR-V in Europe will also be powered by the marque’s i-MMD hybrid set-up, consisting of a 1.5-litre i-VTEC atkinson-cycle engine, alongside a pair of compact electric motors.

Sharp-eyed readers will notice the similar torque figure between the European-spec HR-V and our City RS e:HEV, though Honda says that the new powertrain in the HR-V features a number of improvements, including revisions to the internal combustion engine that resulted in an “increase in torque”, as well as an increase of battery cells from 48 to 60, owing to the HR-V’s larger size.

The latter allows for better storage and deployment of electric power over the existing European-market Jazz, which has a maximum electric throughput of 80 kW. Despite the increased battery size, Honda says that the interior space on the all-new Honda HR-V was not compromised.

Will the all-new Honda HR-V still retain its crown when it makes its way to Malaysia? We think so – click here to find out why!

As with the other e:HEV models, the Honda HR-V will automatically select the most efficient power delivery mode (between hybrid, electric, or engine drive) at any given time. Honda says that the transfer between the driving modes is “virtually unnoticeable” to the occupants.

But on top of that, there are also three driving modes available for the driver to choose from – Econ, Normal, and Sport. Econ mode automatically adjusts the air conditioning system and throttle response for enhanced fuel efficiency; Sport enables a sharper throttle response; Normal, as the name suggests, is a balance between the two.

Did you know that the e:HEV powertrain is related to Formula 1 cars? Read more about it here!

For energy recuperation, drivers can also switch to a “B-range” from the transmission for an “increased EV-like experience” with a more aggressive recuperation profile, allowing for a near single-pedal operation. The energy recovery strength can be further adjusted via the paddles behind the steering wheel.

Honda also says that the use of a single fixed gear ratio transmission on the HR-V’s e:HEV hybrid system creates significantly lower friction as compared to a conventional power split system with a planetary gearbox, which ultimately results in lower energy consumption for pure electric driving.

With all that being said, will the upcoming all-new Honda HR-V feature a similar hybrid powertrain when it’s eventually launched here in Malaysia? Based on the fact that we were one of the first to locally assemble the e:HEV powertrain (for the Honda City R.S.) outside of Japan, we’d say that there’s certainly a chance!

Honda Malaysia might also feel a slight pressure coming from UMW Toyota, since the latter has also recently announced its commitment to locally-assemble electrified models here.

At the end of the day, it will still be a business decision, and if there’s enough demand for it, then perhaps Honda Malaysia could more easily justify the business case. So with that being said, would you be excited to see the Honda HR-V e:HEV here in Malaysia? Let us know in the comments below!