Without any motor shows or large-scale motoring events, this came as a complete surprise. Geely has just presented a new design language derived from their current “Expanding Cosmos” philosophy.

The Vision Starburst examines the new and alternative expressions of the “Expanding Cosmos” theme which the company is using as a design board for future models.

Vice President of Geely Design Shanghai, Guy Burgoyne, said at the unveiling event, “The Expanding Cosmos philosophy serves as a constant inspiration for our designers to discover a new and holistic design language that satisfies our ever-expanding and increasingly diverse range of customers. In search for this DNA in the new digital age, we have pushed the boundaries of technology and innovation.”

The Vision Starburst takes the form of a large fastback, similar to the recently launched Zeekr 001. Full-width lighting signatures are on both the front and back of the concept car, with the light moving from the centre towards to sides, giving the front face a more powerful and three-dimensional aura.

Geely says the door panels intertwine and integrate, with sharp lines making bold shapes. At first glance, however, Hyundai’s “Parametric Dynamics” immediately comes to mind. The wheel arches on the Vision Starburst with multiple horizontal strakes are fitted with lighting units to inform of the battery charging status.

The entrance to the interior of the Vision Starburst is unobstructed, devoid of the central pillar thanks to the fitment of butterfly doors hinged at both ends of the cabin. A simple dashboard layout with a large central display and the traditional round steering wheel is the highlight of an otherwise plain interior.

Ambient lighting inside the cabin as well as on the outside will be used to communicate, giving users a sense of speed and a new driving experience. A new hollow aerodynamic geometric shaped shift lever on the floating centre console is mentioned too, perhaps an item or section most likely to be in the next generation production vehicle.

The Vision Starburst is a pure concept car, but Geely said many aspects of the new design language will be taken and applied to future Geely Auto models. Just give it a few hours and renderings of this concept car with the Proton logos will start appearing in the internet space. 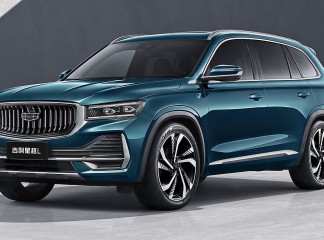