Home News Toyota Vios Challenge 2021 to commence racing at the end of this... Originally scheduled for the end of January but postponed due to MCO 2.0, the first race of Toyota Gazoo Racing Festival (TGRF) Season 4 featuring the Toyota Vios Challenge will take place on the 27th and 28th of March.

Sepang International Circuit will be hosting, and it is strictly a closed-door event and as such, ardent fans can only cheer their favourite celebrities from their homes.

UMW Toyota Motor will continue to stream the entire TGRF event live through all social media platforms as happened since the very first race in 2017.

For 2021, the Toyota Vios Challenge has added a new Rookie Class, making the one-make race series to feature four classes. The Rookie Class features six graduates from the Gazoo Racing Young Talent Development programme who are stepping up from karting to touring car racing.

Drivers in the Rookie class with karting experience age from 14 to 18, while two racers with plenty of e-sport experience are 17 and 20 years old. Based on promotional videos, the Rookie Class with be racing with the older Generation 1 Toyota Vios Challenge car from 2017.

Meanwhile, in the Promotional Class, three newcomers, actor Zizan Razak, singer/songwriter Talitha Tan and television personality Ahirene Ahirudin will be making their motorsports debut with the Vios Challenge in the new Vios GR Sport front fascia. Get to know more about the 2021 racing grid here.

For the first time, two rounds of Gazoo Racing Vios Sprint Cup will race at the Malaysia Championship Series (the first was supposed to be this March date with the next in May), and closing the Gazoo Racing season with the Enduro Cup running in conjunction with the annual Sepang 1,000 km Endurance Race. 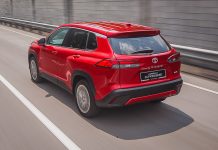