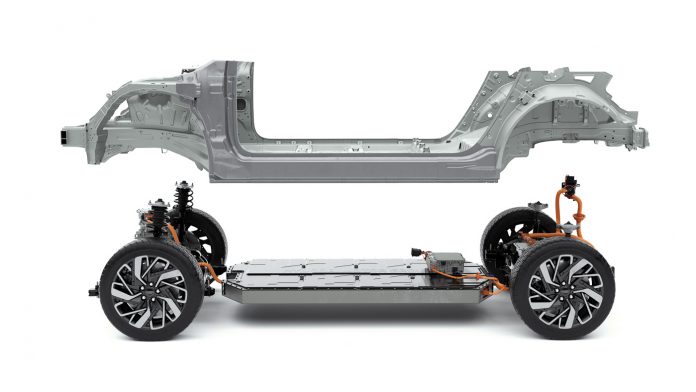 Hyundai Motor Group has unveiled the company’s first dedicated battery electric vehicle (BEV) platform, the Electric-Global Modular Platform (e-GMP). The platform will underpin a wide range of BEV models from Hyundai, Kia, as well as Genesis in the near future.

While Hyundai BEVs do exist now, they are all built on an architecture that was designed initially with internal combustion engines in mind. With a dedicated modular BEV platform, Hyundai says that its future EVs – from sedans to SUVs – will benefit from better driving performance, increased driving range, strengthened safety features, and more interior space.

This is largely due to the skateboard design of the Hyundai e-GMP architecture, which packs all of its batteries in between the two axle. The lowly-mounted batteries help improve overall weight distribution between the front and rear, while also lowering the centre of gravity of the car.

Combined with a five-link rear suspension system – like the ones found on the all-new Mercedes-Benz S-Class – along with the “world’s first mass-produced integrated drive axle”, Hyundai promises enhanced ride comfort and stability while delivering “improved cornering performance”.

The e-GMP is designed for rear-wheel drive as standard, though an additional electric motor can be added to the front axle for all-wheel drive. Powertrain consists of a “powerful” motor of undisclosed size, a single-speed transmission and an inverter, all packed neatly into one module.

While no figures were divulged, Hyundai says that a “high performance model” will boast a 0-100 km/h time of less than 3.5 seconds, and a top speed of 260 km/h – 70% higher than the company’s existing motors.

As for the battery packs, Hyundai says that they will be the most power-dense system it has ever created – 10% more than existing EV battery technology. According to the company, this is largely thanks to the enhanced cooling performance as a result of a new separate cooling block structure, which helps make the batteries more compact.

With the ability to pack more batteries into a smaller space, cars based on the new Hyundai e-GMP platform will be capable of more than 500 km of range based on the WLTP cycle. With its standard 800V charging capability (currently only available on the Porsche Taycan), charging to 80% with a 350 kW charger takes just 18 minutes, or an additional 100 km range in five minutes!

As 50-150 kW chargers are more commonly seen at charging stations these days, the e-GMP platform will also come equipped with a “world’s first” patented multi-charging system that will automatically boost the power input from 400V to 800V for stable charging compatibility.

The new Integrated Charging Control Unit on board the e-GMP platform also comes with a vehicle-to-load (V2L) feature, which means the cars will be able to use its battery reserve to power other electrical equipment, or even charge another EV.

The e-GMP platform will be introduced to market starting in 2021 with the launch of the Ioniq 5 EV, and will play a huge role in realising Hyundai Motor Group’s strategy to introduce 23 BEV models across its brands by 2025.