Take a peek at the AutoBuzz.my parking space and you’ll notice one thing – we love our old(er) cars. Be it an E36 BMW 3 Series or a trusty Toyota Corolla, with the right amount of care these old gems can still be a lot of fun, while still keeping our bank accounts sort of in check. Despite the joy that they bring to us though, there are of course some drawbacks in owning an older vehicle.

Some of these creature comforts – like the lack of automatic headlights – don’t really bother us too much, but as the world become more and more reliant on our mobile phones, the lack of a modern infotainment system with Apple CarPlay or Android Auto connectivity really made a couple of us rethink our choice in cars.

In a simpler car interior design, swapping out the headunit is as easy as assembling Lego models for a four-year old. But what if you own a car like GC Mah’s Lexus RX350, or “Roxy” as he calls it, where the existing infotainment system is moulded directly into the dashboard? Enter DMP Car Design.

By using a custom-made bracket, the team at DMP is able to fit a much larger touch-enabled screen – measuring 10.25-inch in diameter – into the same space occupied by the original unit, elevating the entire ambience of the interior. GC even said that he felt as if he’s sitting in the brand-new Lexus RX!

Aside from Apple CarPlay and Android Auto connectivity, the new infotainment system is also able to offer every app available on the Google Play Store, which means you’ll be able to watch Netflix directly from your infotainment display… not that we recommend it especially while driving.

The new system from DMP Car Design also supports a 360-degree around view monitor, and we also got the chance to see how these cameras are calibrated – automatically via software – using a specially-designed mat. What other features are there? Well, we’ll let you find out yourself in the video! 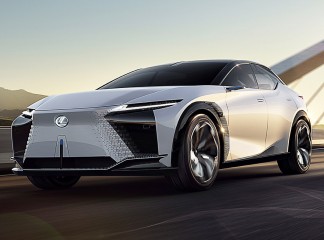 The Lexus IS 500 F Sport Launch Edition looks like a real menace!