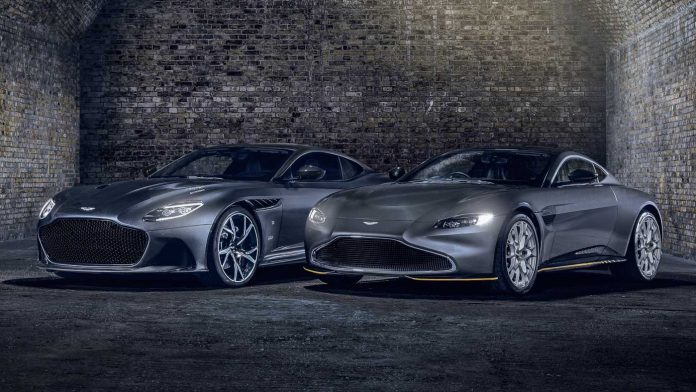 Aston Martin seems to be very proud of its association with the James Bond franchise. In recent years, the British luxury sportscar maker has already introduced several commemorative models such as the DB5 Goldfinger and DBS Superleggera OHMSS Edition; heck, even their special-edition whiskey has something to do with the 007 brand.

Now celebrating the release of the 25th James Bond film – No Time to Die, Aston Martin’s Q personalisation department is once again introducing two special editions inspired by the cars featured in the film, the Aston Martin Vantage and DBS Superleggera 007 Edition.

The Vantage 007 Edition is inspired by the original Aston Martin V8 from The Living Daylights in 1987, highlighted by the mesh grille with chrome surrounds, and dashed yellow diffuser at the rear inspired by “the hazard stripes on the film car’s rockets”, and finished in a coat of “authentic” Cumberland Grey exterior paint.

For the complete James Bond experience, you can even order the car together with a set of limited-edition skis and ski rack, which is obviously in reference to the “winterised” car in from The Living Daylights.

Aston Martin went to town with the Bond memorabilia on the obsidian black leather and dark chrome interior of the Vantage 007 Edition, with “subtle” film references such as the 96.60 radio station frequency used to aid Bond’s escape embroidered on the sun visors, cello ‘f holes’ outlines on the carbon fibre seat backs, Cross hairs etched to the paddle shift levers, and even a laser-etched gadget plaque that references the various weapons and devices seen on the original car – unfortunately there aren’t any rocket launchers on the special edition car.

As for the DBS Superleggera, the 007 Edition – which Aston Martin says features the same specification as the one in the upcoming film – comes with a special Cermaic Grey exterior paint, with a black tinted carbon fibre finish on the roof, mirror caps, splitter, diffuser, and the rear Aeroblade.

Inside, the DBS is significantly more understated in appearance compared to the Vantage, though still comes with 007 references such as 007 branding on the door cards, armrest buckle badge, and rear subwoofer cover, red detailing on the outline of the seats, as well as a sill plaque to denote its special serial number from the limited production run.