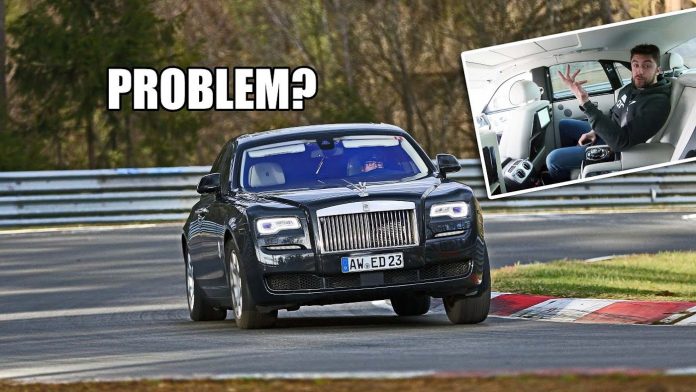 Rolls-Royce cars are usually known for their ultimate luxury experience, from the cabin materials to the ride quality – the race track is pretty much the last place you’d expect a Rolls-Royce to be at.

However, that doesn’t mean that it is not capable of handling the curves once in a while. In an effort to prove the point, YouTuber Misha Charoudin and his friend Faby (who owns the car featured in the video) took the Rolls-Royce Ghost to the ultimate race track of them all – the Nurburgring Nordschleife.

In case you didn’t know, Rolls-Royce is owned by BMW, who themselves have quite a reputation for driving dynamics. The Ghost featured in this model shares the same chassis as the fifth-generation BMW 7 Series.

Of course, the air suspension set-up on the Rolls-Royce is tuned for comfort, soaking up the undulations, surface imperfections, and even the kerbs. This might have possibly been the most comfortable lap around the ‘Ring ever.

The Rolls-Royce doesn’t lack in the horsepower department too, with a giant 6.6-litre twin-turbo V12 engine under the hood, producing 563 hp and 780 Nm of torque. Pair that to a silky smooth eight-speed ZF automatic transmission, and the Ghost can reach 100 km/h in just 4.9 seconds from a standstill.

The driver commented that the Ghost actually handles pretty well around the track, but it was later revealed in the comments section that he was not pushing the car as hard due to the winter tyres.

For something weighing over 2.5 tonnes, the Ghost certainly looks pretty comfortable around the Green Hell. It’d be interesting to see how the Rolls-Royce performs with proper performance tyres!