Being the longest-standing Proton model, the Saga nameplate is no stranger to Malaysians. With its low entry price, the Proton Saga has played an important role in our lives for many generations, especially in the “my first car” category.

Everyone has a Saga story, and for me, the Proton Saga was precisely my first car, some eight years ago. You can probably imagine what an emotional experience it has been for me to drive the latest Proton Saga again, and I am happy to report that it was a great one. I assure you that this is not me looking through my rose-tinted glasses.

The 2019 Proton Saga has been priced down across the board, topping off at RM39,800 for the Premium variant we have here. Despite seeing a reduction in price, the Saga is still improved in almost every aspect – take for example the styling changes, where Proton has seemingly breathed a fresh new life onto the Saga.

Quantitatively, not much has actually changed in terms of design. However, the few strokes of the brush have made substantial improvements to the rather bland A-segment sedan, and dare we say, even making it look classy.

The good news continues inside, too. It’s hard to imagine that a entry-level A-segment sedan comes with these many bells and whistles, but the Proton Saga surprises over and over again. When was the last time that you’ve seen a RM40,000 car come factory equipped with a seven-inch touch-screen infotainment system?

Sure, the Android-based infotainment system isn’t the most intuitive to use, and it doesn’t come with Proton’s now-iconic “Hi Proton” voice command functionalities, but at this price point, the mere fact of it being included should be applauded in our opinion.

The infotainment system is paired to a great set of speakers too, perfect for the young’uns and their Spotify playlist of the latest hits. The audio performance is further enhanced by the quiet cabin, a true testament to the refinement Proton has engineered onto the entry-level sedan.

Refinement is the keyword here, not just in terms of noise, vibrations and harshness (NVH), but in little quality of life improvements too, such as the water-proof fabric seats, padded storage tray, and remote boot release.

The Proton Saga has always been seen as the underdog in the segment in recent years, especially in terms of build quality and value for money. With the new facelift model though, it’s hard to justify that claim anymore – and we haven’t even got to the driving part yet.

Historically, Proton cars have always protrayed the best handling capabilities in its class, and the latest Saga is no exception. Although focus has been placed on comfort, the Saga will not look out of place when it encounters the odd back-road, where it handles bends with absolute poise.

Negotiating changes in direction feels natural on the chassis, to the extent that some might even consider it exciting. Though, the steering feel is a slight let down with minimal feedback, due to it being tuned for better maneuverability in urban areas.

On the highway, the Proton Saga struts along confidently, and the 1.3-litre four-cylinder engine generates enough power (95 hp, 120 Nm) to propel it up to the national speed limit. However, overtaking other cars at highway speeds might need a little more motivation.

Proton has also switched out the infamous Punch CVT for a Hyundai-sourced four-speed automatic gearbox in the facelifted Saga. Besides being a cost-cutting measure, the new gearbox has also completely transformed the way the compact sedan drives.

The new four-speed slushbox will happily pull revs up to the 4,000 RPM range, making the Saga feel chirpy and eager to respond. Do I wish that there’s another gear at the top end? Sure – especially for highway cruising. However, the new four-speed automatic is more than sufficient – nay, perfect – for urban applications.

In many ways, the 2019 Proton Saga has returned to its roots as a reliable and dependable car, that can still be fun to drive. Tack on the added refinement and the extra kit, it’s no doubt that Proton has hit this one right out of the park.

With the lowered price point, the Proton Saga is once again the recommendation for a great first car. But perhaps more importantly, it also ticks a lot of the boxes to be the only car you might ever need – in other words, a true people’s car. 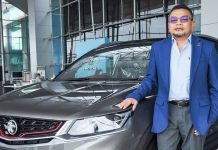