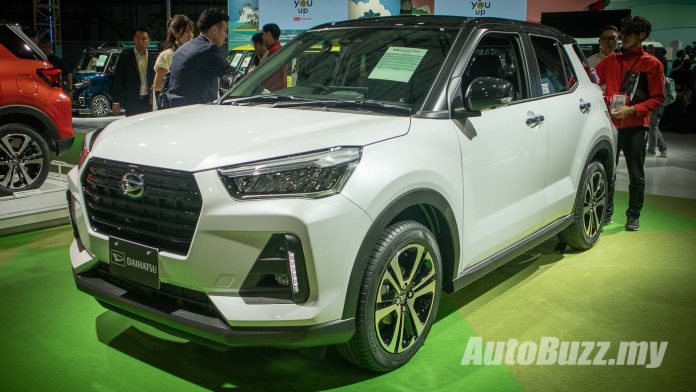 Perodua today organised its 2019 full year review, where the local carmaker revealed some performance figures for the previous year, as well as outline several key targets for 2020.

In his speech, Perodua’s President and CEO, Dato’ Zainal Abidin Ahmad shared his aspiration for the company to become a global player, as the ASEAN development hub for partner Daihatsu.

Perodua claims that smaller engine capacity could bring several advantages, including lower road tax fee, improved efficiency and emissions due to lower weight, while maintaining a comparable power output to larger engines with the use of turbochargers.

In the slides, Perodua notes that it “will keep up with global trends as much as possible”, while maintaining its core principle of affordability.

Interestingly, the Daihatsu Rocky – which is heavily rumoured to be Perodua’s upcoming D55L SUV – fits the bill, almost to the letter.

The Daihatsu Rocky is built on the DNGA platform, which is an iteration of the Toyota New Global Architecture. Powering the Rocky is a 996 cc three-cylinder turbocharged engine, generating 98 hp and 140 Nm of torque.

Unsurprisingly, Perodua did not comment specifically on the D55L or Daihatsu Rocky. However, the evidences are strongly pointing towards this possibility.

If anything, we probably won’t have to wait long to see the new Perodua SUV. Dato’ Zainal Abidin said that the national carmaker has the capacity for a minor refresh and a new model launch each year.

With the updated Bezza already introduced this year, we wouldn’t be surprised that Perodua’s next launch event will be for the heavily rumoured D55L SUV.