As part of the initiative, UMWT has appointed paralympic gold medalist Abdul Latif Romly as its ambassador of the campaign to inspire employees, partners and customers to “achieve greater heights by attempting missions that they themselves deem impossible.”

UMWT will be hosting the “Toyota OutRun” fun run under the campaign banner to raise funds for the Paralympic Council of Malaysia’s ‘Fitness and Exercise with Person with Disabilities’ programme, which will be happening on 17 November 2019 at Bandar Rimbayu, Kota Kemuning.

On the appointment, UMWT Deputy Chairman, Akio Takeyama said, “Latif was up against impossible odds at the 2016 Summer Paralympics. The world saw him broke the T20 long jump world record three times on the same day. It was Impossible. Then it wasn’t. At Toyota, mobility is about overcoming challenges and making dreams a reality. That’s why we’re teaming up with Latif to support differently-abled children so they too can start their impossible.”

Registration for the run will cost RM50 per participant, and you can register through Toyota’s website starting from 10 September 2019.

Besides the run, UMWT Toyota in partnership with Toyota Motor Corporation will also be hosting a Toyota Classics concert performed by London Chamber Orchestra on the 29th of October 2019.

Part of the proceeds from the Toyota Classics concert ticket sales will be used to rehabilitate and restore degraded mangrove areas in Sulaman, Tuaran in collaboration with Sabah Wetlands Conservation Society, and involve about 13,000 students from neighbouring schools, university as well as the community.

The University of Pahang is also set to benefit from this programme, as UMWT aims to equip the youth and community in Lanchang, Pahang with sufficient information on Science Technology Engineering and Mathematics through the university students.

In addition, students from the Faculty of Music of UiTM will also be given the opportunity to participate in a workshop with members of the London Chamber Orchestra, providing the former with international orchestra performances exposure.

The Toyota Classics tickets can be purchased at the Dewan Filharmonik Petronas Box Office or online starting 10 September 2019, priced from RM100 to RM250. 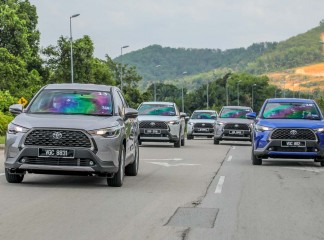