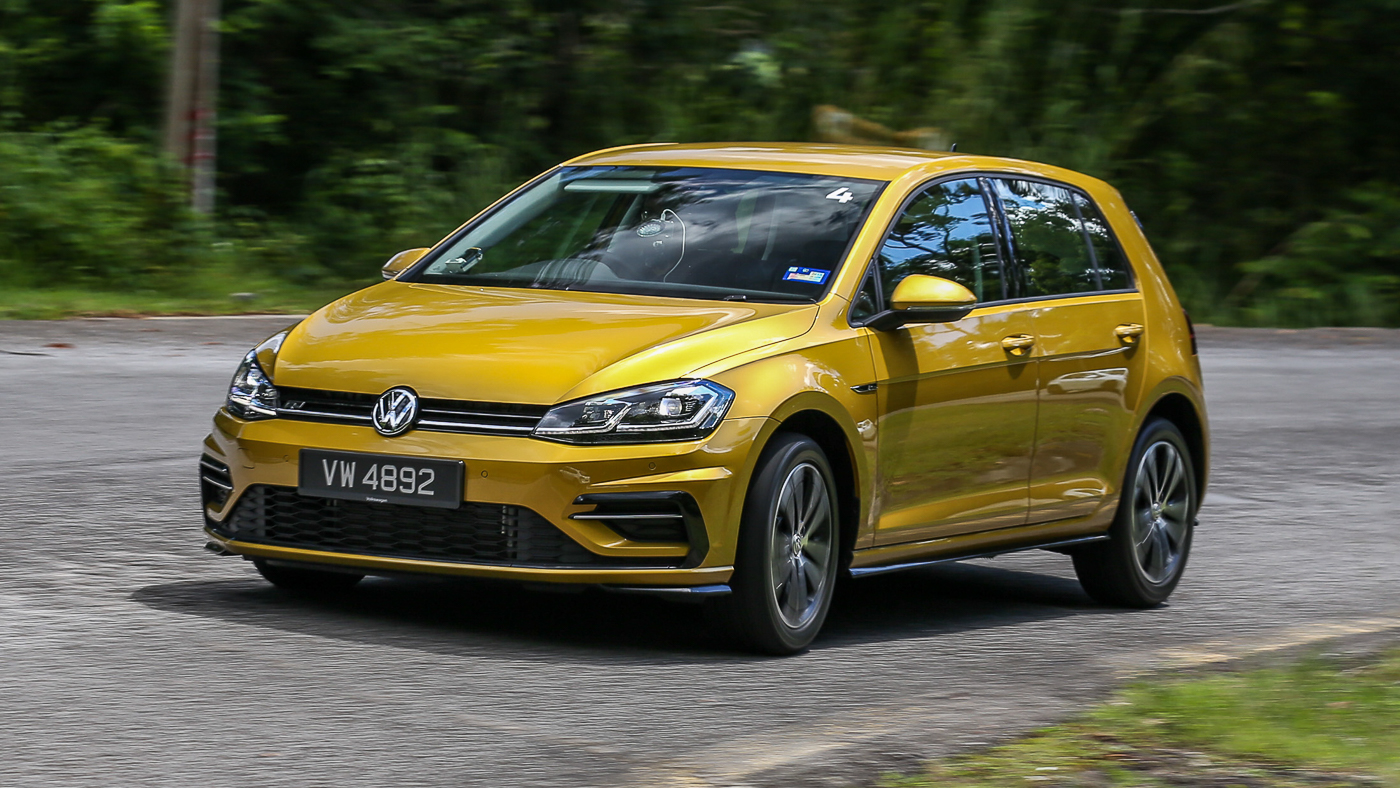 You’re right, I may have exaggerated it; partly to rope you into this article (my bad) but mostly cause the Golf TSI R-Line does tend to make you forget you’re in the lesser of the Golf range; especially with the highly impressionable GTI and Golf R placed above it.

You’ve probably came across our Mk7.5 Volkswagen Golf R review published a few weeks back and since I’ve got the Golf GTI review pending, I’ll focus my attention on the Golf TSI R-Line which during my brief encounter with it, en route to Johor Bharu with Volkswagen Malaysia recently, constantly made me question if it’s worth all that headache, spending more on a GTI if not the Golf R.

Before the highway blast down south, I got to experience how the R-Line would perform through the twisty ends of Bukit Putus along with a convoy of GTIs and Golf Rs and was pleasantly surprised how resilient the Golf TSI was (aided by some extra courage) in keeping up with its more capable brothers especially in the corners without threatening you with the imminent danger of being sent off the road.

What definitely enhanced the experience through the bends was the quick-shifting 7-speed dual-clutch DSG gearbox that just never seems to disappoint with its telepathic-like quick reactions along with the extended XDS differential lock that kept the car firm on its tracks.

In the straights, well that’s another story. With a modest 150 hp and 250 Nm of torque from a 1.4-litre turbocharged engine, it gets minusculed by the more potent GTI and muscular Golf R but I’d bet my money in saying that if the brief mountain run was against other cars of the same price tag (regardless of segment), they would’ve been hard done by the Golf TSI R-Line.

In the hands of a more capable driver of course – definitely not by me. I can’t even turn the steering wheel without tangling my arms sometimes.

On the open road, despite the noticeable lack of grunt, I’d still refuse to consider the TSI’s performance as lacklustre. While it may not pull like a train, a trait both its elder brothers proudly possess, given a clear stretch, the puny 1.4-litre TSI engine will still keep you on the edge of your seat.

It will also keep most cars (with larger displacement) at the edge of your rear-view mirror without too much of a struggle and I’m speaking from first-hand experience here. *wink*

Having now driven the GTI (again, review to be published soon), the difference in stability especially at (very) high speeds is negligible but what wouldn’t go unnoticed is the wind noise but really, it’s only profound once you’ve pass the threshold of unspeakable speeds.

What you would also notice sitting in the cabin is how “insignificantly indifferent” the TSI is, to its GTI brother. Aside from the fabric trims, the lack of visually-enticing badges like those in the GTI, the TSI R-Line’s interior is just more sedated, more subdued but isn’t a lacking one.

Now, Volkswagen Malaysia is even offering R-Line leather upholstery as standard, in replacement of the fabric seats.

That said, what could’ve come in handy especially when hard braking was needed to avoid rear-ending the fools who switched lanes suddenly without indicating, was a pair of paddle shifters but it wasn’t exactly life-changing having to resort to the good ol’ gear lever for a few quick downshifts.

Destined as the “efficient one” rather then one for all-out performance, mileage returns were quite impressive too. Having covered over 320km from both urban areas and on the highway, the TSI still had just under half a tank of fuel left.

On the Autocross was where the limits of the TSI R-Line was put to the absolute test and I must say, it wasn’t at all a disappointment. In fact, I’d even go as far as to say that it was lively in its own way, very maneuverable and quite eager to power out between the cones – all in all, a real fun car considering what the TSI R-Line was built for – with more focus on efficiency and comfort than outright performance.

Yes, the suspension may have been on the softer side and the steering did not have the dart-like precision of the GTI or even the poise of the AWD Golf R. However, factoring in the sufficiently capable powertrain, aided by all the essence and goodness of a Volkswagen Golf, it was very easy to get on the TSI’s limit without fear of overwhelming the car despite my limited talent behind the (flat-bottom) wheel.

Given the limited time with the Golf TSI R-Line, my first ever encounter with any Golf TSI for that matter, I must say that it was simply impressive. It did everything it was built and intended for, and excelled at it. I suppose if you had a go in it, you wouldn’t disagree with me.

What you’d most likely also agree with me is that despite all its abilities, it’s rather steep paying the approx. RM160k asking price when you can get so much more for the money (actually mostly just in size).

That’s because if you’re looking for a car in that price bracket, often times you’re in it for the value and as much as I believe that the Golf TSI R-Line offers more value than meets the eye, the sad reality is that most would agree with me but end up buying a Camry or Accord.