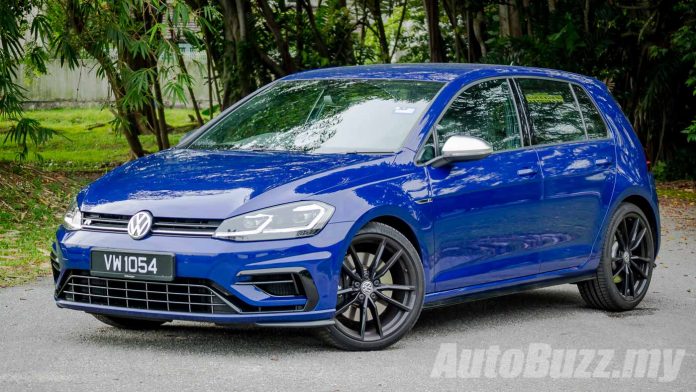 Ever since the first Volkswagen Golf R32 Mk4 came to life in 2003, the all-wheel-drive Golf quickly became the benchmark for hot hatchbacks. All-wheel drive traction, short overhangs and abundance of torque made for the perfect recipe for an everyday weapon.

The MK5 R32 featured an updated 3.2-litre VR6 engine with minor tweaks here and there, refining the rough edges of its predecessor. Another generation later, the Golf R Mk6 dropped the naturally aspirated engine for a smaller 2.0-litre turbocharged four-cylinder petrol engine, giving it the low-end torque the VR6 engines could never deliver.

Fast forward to the present time, the Golf R Mk7 was given a little more power and a diet which seemed like good progress especially after it received a mild refresher in 2017 with updated styling and more tech.

But the automotive world is a relentless one as competition are closing in fast on the might Golf R. Take the Mercedes-AMG A 45, Ford Focus RS (which Malaysians do not have the privilege of buying) and its close sibling the Audi RS3 for example, they all have all-wheel drive, heaps of power and rapid-fire performance that could humiliate supercars of old.

Where does the 290 hp Volkswagen Golf R Mk7.5 sit then in the hot hatch food chain? Has the mighty R gone out of fashion? Or does it still have plenty of love to give?

Performance You Can Rely On

With the facelifted Golf R, the EA888 2.0-litre four-cylinder turbocharged TSI engine has been bumped up to 290 hp and 380 Nm of torque, 10 hp more than before. Interestingly, the six-speed wet clutch DSG has made way for a seven-speed unit (also wet clutch). Century sprint, however, is no quicker at 5.1 seconds and top speed is electronically limited to 250 km/h.

Off the line, the new transmission feels no different than the previous unit, accurate and immediate. Only when cruising down the highway will you really take notice of the extra refinement (lower rpm) from the extra cog. Not to mention you still get the Launch Control Programme.

All that grunt is transferred to all four wheels via the brand’s famed 4MOTION all-wheel-drive system which is one of the best in the business. Torque is transferred between the front and rear axles accurately to slingshot you out from a corner drama free. I must say, it is the easiest and safest machine I have the privilege to toss it around the twisty back roads.

Given the same twisty conditions and driver skills, the Golf R will reliably stay ahead of the baby AMG despite having a power deficit of almost 100 hp. This 4Motion is really trick stuff, coupled with the responsive steering rack and fantastically balanced chassis makes the Golf R a formidable weapon both on and off track. Did I mention that it’s adequately comfortable too?

In today’s world, 290 hp and 380 Nm of torque are frankly speaking, not a lot of power. Even the front-wheel drive Honda Civic Type R packs 305 hp and 400 Nm of torque, so in theory, the all-wheel-drive Golf R should be spewing out even more ridiculous figures.

But even so, with Launch Control activated the Golf R will get up to triple digit speeds quicker your brain can process what just happened. In gear acceleration is also remarkable, foot down, boost on and you’re off again chasing the other end of the 320 km/h speedometer.

Besides, it is all about how you capitalise those horsepowers that matters.

The Cabin is Almost There

The facelift exercise has brought the Golf R to the digital age with fancy 12.3-inch Active Info Display LCD instrument cluster and a 9.2-inch Discover Pro infotainment system – something the Merc is lacking far behind. The cabin is also furnished with beautiful R “Vienna” leather upholstery, blue ambient lighting and grey cross stitching.

The Active Info Display and Discover Pro media features bright and crisp graphics and neatly blends in with the rest of the cabin. The bezel-less infotainment screen not only looks expensive but feels equally so. Intuitive and responsive is the name of the game here.

Other than those two new items, the rest of the cabin is fairly basic and does not look too different when compared to its 1.4 TSI R-Line and GTI siblings, you really have to squint for the blue highlights and R badge to appreciate this is the mighty Golf R. I would like it better if Volkswagen could put a little more effort into distinguishing this cabin, like adding some carbon fibre bits or aluminium finish trims to tie in with the silver side mirrors.

Call me a left-wing all you like, but I am a little bothered that Volkswagen Passenger Cars Malaysia (VPCM) has omitted the panoramic sunroof that was previously available exclusively on the Golf R 5-door. Yes, I like to have the moon and stars shine into the cabin and the occasional fresh air to enter the cabin from the roof.

It Does Have Its Weird Kinks

Weirdly enough for a global product, the Discover Pro Media was unable to decipher Chinese characters on the display but clearly presents it on the Active Info Display. It has been an odd issue since the days of RCD510 on the Passat B7 but I believe it would not be a concern for many. Just a little inconvenient while streaming Chinese songs on my Spotify.

Another thing has got to do with fakery more than anything else. The Golf R has a built-in mechanism to blast artificial engine noise through the speakers. For the first two days you’ll be giggling away at the hilarious V8 rumble while meshing the throttle but after that it just becomes silly.

Disable everything and you’ll understand why the engineers have included this option. The R is uncannily muted. Believe me when I say muted because the last I checked, this is a rival to AMGs and RS’. The most you get out from the engine is a muffled growl and don’t even bother to let the windows down to catch a note of the famous DSG fart. Now I see why most of the Golf R (and GTI) community in Malaysia opted for an aftermarket exhaust.

Will I Buy It?

If you are in the market for a hot hatch that you can comfortably cruise to Sepang, annihilate the former F1 circuit and make your way home in time for a family dinner with the in-laws, the Volkswagen Golf R Mk7.5 will accomplish all that in a gentleman fashion.

The facelift just made the whole package even better with more bells and whistles to play with as well as a tad more power. Not to mention that VPCM now offers 3-Years or 45,000 km free service package and 5-Years manufacturers warranty, you are well taken care of in the after-sales.

I will be honest, as accomplished as the Golf R is, it would not be my first pick. As a bachelor in his mid-20s, I would prefer something a little more character, something a little shoutier and something with a little more flair while my body (and life) can still handle all that flair. But let’s not kid ourselves, who in the world can afford RM278,888 (price without GST & SST) in his or her mid-20s…