Bentley is not letting its sister model, the Lamborghini Urus taking all the limelight as the world’s first super SUV. The British carmaker has big plans for their Bentley Bentayga – the Pikes Peak International Hill Climb.

What has been six-months of preparation work, a race-prepped Bentayga is ready to take home the title of fastest Production SUV.  Pikes Peak International Hill Climb, now in its 96th instalment sees cars from around the world attempting at the 20 km course which features 156 corners and 4,720 ft climb. The Bentayga will have to clock a minimum average speed of 60 mph (96.5 km/h) to achieve its target.

Piloting the ultra-lux SUV is two-time overall Pikes Peak champion Rhys Millen who said: “We’ve honed the Bentayga’s incredible abilities and ensured we have a car for Pikes Peak that’s both safe and fast through two very productive test sessions with the Bentley Motorsport team.”

The Bentayga in question is a largely standard W12-powered production car with some tweaks that fall within the hill climb’s regulations. This includes stripping away 300 kg worth of interior trim, added a roll cage, fire suppression system, racing seats, Akrapovic sports exhaust and sticky Pirelli tyres.

“The course is one you can only attack with a car that can gain and lose speed very quickly, because it’s so tight and twisty. The combination of 600 hp, 900 Nm and carbon ceramic brakes means that the Bentayga can accelerate and decelerate incredibly hard – and that’s what I’ll be counting on for my run. I can’t wait to get started at the mountain later this week,” said Millen. 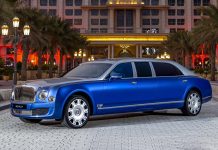