Six months after its global unveiling in January, the eighth-generation Toyota Camry is now officially on sale in the US. Besides getting an all-new design and Toyota New Global Architecture (TNGA) platform, the US market gets three engine options, while the Toyota Safety Sense-P active safety systems come as standard!

Powertrain options for the US Camry include the 2.5-litre four-cylinder Dynamic Force petrol, 3.5-litre V6 and 2.5-litre Toyota Hybrid System (THS II). The petrol engines are mated to a new Direct Shift eight-speed automatic for better power delivery as well as improved fuel efficiency. The hybrid mill gets an e-CVT (Continuously Variable Transmission) with six virtual ratios instead.

The new 2.5-litre Dynamic Force has a rated output of 206 hp and 252 Nm of torque. This new engine features direct injection and Dual VVT-i with Variable-Valve-Timing-intelligent Electric VVT-iE technology with a compression ratio of 13:1 for increased thermal efficiency and power output.

On the hybrid, Toyota has increased the compression ratio of the 2.5-litre mill to 14:1 and slapped on an updated Power Control Unit with improved cooling and larger lithium ion battery pack. Power output of the hybrid motor is rated at 176 hp and 221 Nm of torque.

Stepping up to the big boy, the 3.5-litre V6 is an all-new engine with D-4S direct injection system and VVT-i that produces 301 hp and 362 Nm of torque – an increase of 33 hp and 26 Nm over the old V6 mill. Toyota also claims the new V6 is also eight percent more fuel efficient.

In the US, Toyota is offering the Camry in five variants – L, LE, XLE, SE and XSE, each differing in exterior trim, interior equipment and wheel sizes. However, Toyota did not compromise on safety equipment as all Camrys sold in the US come with Toyota Safety Sense P (TSS-P) active safety system as standard. 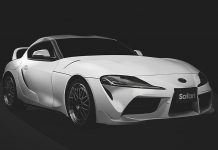