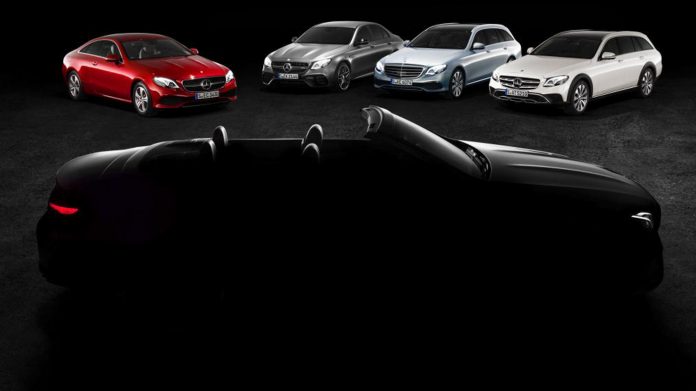 The W213 Mercedes-Benz E-Class had expanded beyond the three-box configuration ever since the sedan was launched last year. Basically, there’s an E-Class for everyone, be it a coupe, an estate, or even a drift-happy monster. Completing the W213’s lineup is the new 2017 Mercedes-Benz E-Class Cabriolet.

This single teaser shows a shadowy image of the E-Class cabriolet, but what’s distinguishable here is its four-seater configuration. It’ll most likely share similar proportions with the coupe equivalent, which already is bigger than the previous E-Class Coupe in dimensions.

A variety of engines will be available, beginning with the 333 hp 3.0-litre turbocharged V6 petrol engine with 4MATIC as its flagship, for now. Other possible engines include the 2.0-litre turbocharged four-cylinder petrol engine with two different tunes – 184 hp and 245 hp,  together with the 2.0-litre turbodiesel mill that makes 194 hp. Regardless of engine choice, they all will be mated to a nine-speed G-Tronic automatic transmission.

The 2017 Mercedes-Benz E-Class Cabriolet will be sitting alongside the three Mercedes-AMG specials, the Mercedes-Maybach G 650 Landaulet, and a new “electric sports car” concept at Mercedes-Benz’s booth in Geneva. It’s certainly going to be a busy week for the three-pointed star!