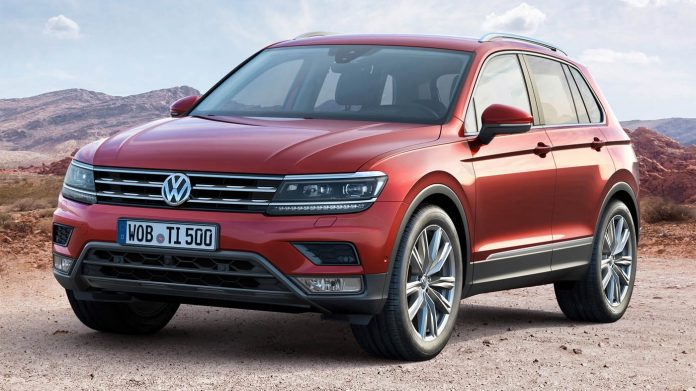 The all-new Volkswagen Tiguan has been unveiled at the Frankfurt Motor Show. This second-generation replacement of the model which sold as many as 2.64 million units worldwide is slightly bigger, yet weighs lesser than the outgoing model by some 50 kilos.

The design looks chunkier than before but it was actually tested in the wind tunnel, resulting in a reduction of overall air drag by as much as 40 percent. The nose was previewed earlier this year by the Cross Coupe GTE Concept, which joins the entire grille and headlamps together with intersecting horizontal lines. LED headlamps make their first appearance on a VW SUV, but they’re optional items except on the Highline variant.

Its side profile features bulging wheel arches, while the entire vehicle is marked by the double character lines that emerge just aft the front fenders and all the way to the tail lights. Meanwhile from the shoulders up, the pillars were designed to improve all-round visibility from the inside.

At the back, the tailgate cuts wide into the standard LED tail lights, and there’s an integrated diffuser in the bumper finished in granite grey.

The growth in length translates to more interior space. The entire cabin is now 26 mm longer, and rear passengers gain 29 mm more knee room while the boot is now at 615 litres, which is 145 litres bigger than before. The rear bench backrests split and recline at multiple angles, freeing up to 1,655 litres of cargo space in the back.

MIB II enables connectivity to either Apple or Android smartphones, and there’s even an Interface box to connect the phone to the vehicle’s antenna which also charges the phone wirelessly.

Drive is sent to the front wheels on the base models, and 4MOTION all-wheel drive system is available as option, using a fifth-generation Haldex coupling with electronic differential locks (EDS) integrated in the electronic stability control (ESC). The ground clearance has been increased by 11 mm to 200 mm, and there’s an option for a different front bumper which increases the approach angle from 18.3 to 25.6 degrees.

The all-new Tiguan will be available in four trims: Trendline, Comfortline, Highline, and R-Line. The range-topping R-Line gets 20-inch Suzuka alloy wheels, colour-coded  bodykit, and interior add-ons such as the R-line seats, R-Line steering wheel, and stainless steel pedals.

As standard, the Tiguan comes with seven airbags, together with the Front Assist monitoring system which covers the Pedestrian Monitoring and the City Emergency Braking, Automatic Post-Collision Braking System, and the Lane Assist lane departure warning system. Driver Alert system is offered as standard from Comfortline and above, while Highline Tiguan is equipped with Adaptive Cruise Control as standard.

At the same time, VW also announced there will be a Tiguan with a stretched wheelbase to target the Chinese and the North American markets, and it is slated to go on sale in spring 2017.