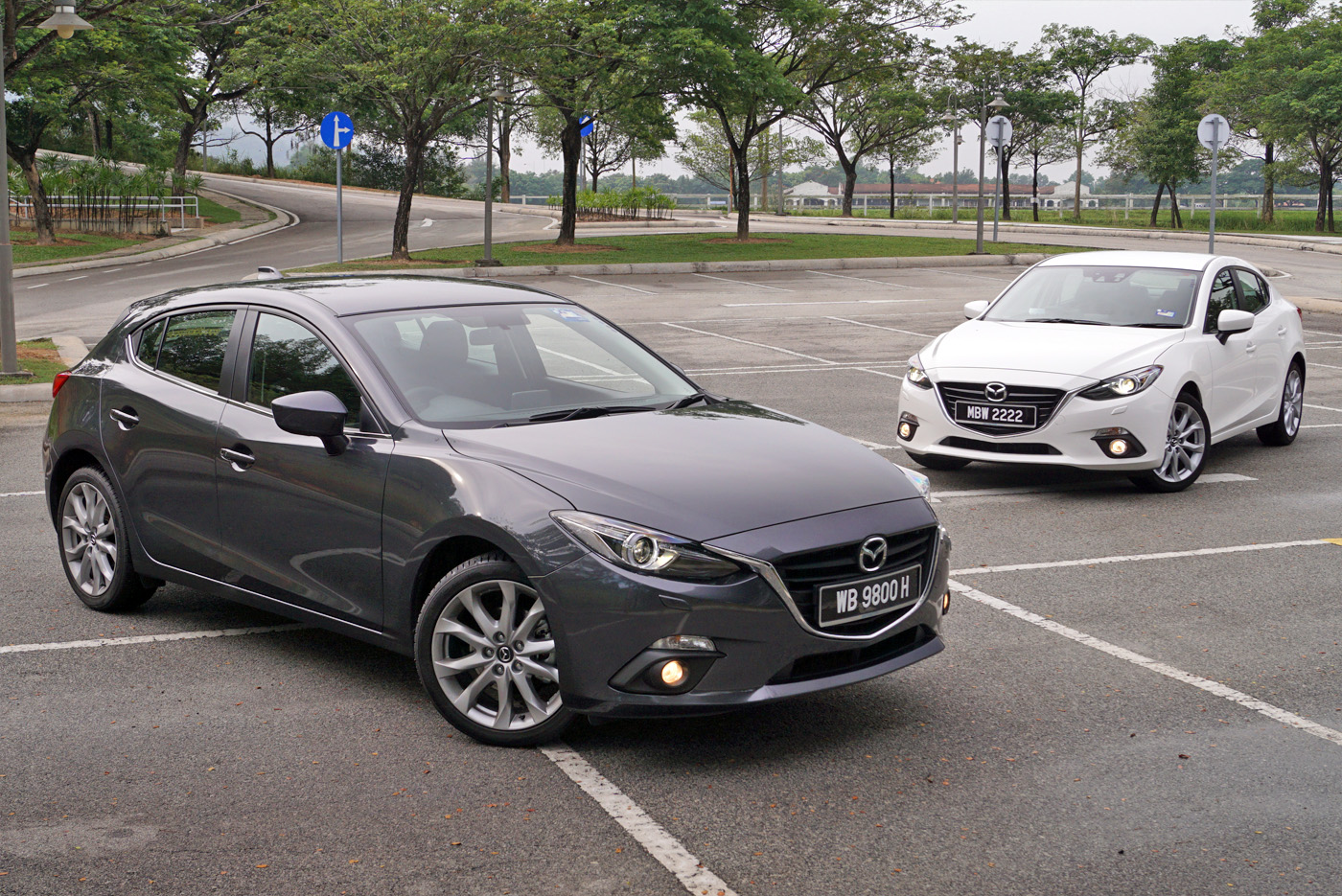 When the third generation Mazda3 was introduced in 2014, the fully imported sedan was only offered in a single trim. We loved it because it drives so well but the confused specification of the CBU sedan that costs nearly RM 140k left us yearning for more.

A year later, the introduction of the locally-assembled Mazda3 is almost like a relaunch for the car. The CKD sedan gets its specs sheet revamped while at the same time getting a substantial price reduction, and it is now joined by a hatchback variant too.

Apart from the identical price tag, both cars here are fitted with the same 4-cylinder 2.0-litre SkyActiv-G mated to a six-speed SkyActiv Drive automatic transmission. The normally-aspirated powerplant gives out 162 hp and 210 Nm of torque to the front wheels. The front three-quarter of the two cars are similar in shape and they even wear the same 18-inch alloys wrapped in 214/45 R18 Toyos, but the devil’s in the details.

The grille is finished in glossy black and the foglamps are framed by a chrome ring on each side for the sedan, but on the hatchback the grille and foglamps surrounds are left untouched in matte black. The Bi-Xenon headlamps look the same on both cars with LED DRLs and both feature Adaptive Front Lighting System (AFS), but on the sedan it gains High Beam Control System (HBC) that automatically dips the high beam upon sensing oncoming traffic.

The main difference outside is obviously the back end. The basic design theme is the same on both cars right down to the shape of the rear LED lights but they’re not interchangeable with one another. However, the main gripe for us is that only the hatchback have exposed tailpipes. It might not be an issue to most people but when the base Mazda6 2.0 have exposed tailpipes, we just couldn’t understand why the Mazda3 sedan can’t have them.

While the hatchback measures 4,460 mm long, the sedan is 120 mm longer and every millimeter goes to the rear overhang. Unlike the hatchback, the sedan’s trunk can be opened using the remote or by pressing a button near the driver’s footwell. Pop open the sedan’s boot lid and you’ll see 408 litres worth of cargo space, which is about 50 litres more than in the hatchback.

A space saver spare wheel reside under the boot floor, while there’s a specific compartment for the jack inside a cavity on the right-hand side of the boot. The rear seat backrests split 60/40 and they fold flat for an extended cargo area.

Inside the cabin, the sedan is differentiated from the hatchback in trim specifications. The Mid spec hatchback gets you the MZD Connect System that comes with a 7-inch touch screen monitor. It supports Bluetooth connectivity and voice activated control, while the screen will also display the live feed from the reverse camera. You will also get keyless entry and push start button, automatic climate control, as well as a leather wrapped steering wheel with paddle shifters.

The High spec sedan retains everything the hatchback has but adds even more kit. Additional buttons on the steering wheel are for the cruise control, while both stalks on the steering column have an extra “Auto” function for the wipers and lights. The MZD Connect System gains GPS navigation as well as extra menu for the driving assistance system, such as the Lane Departure Warning System (LDWS) and the blind spot warning system called Rear Vehicle Monitoring (RVM).

Furthermore, the High spec sedan’s interior receives black leather upholstery with contrasting red stitching and the driver’s seat gets upgraded with electric controls. It also swaps the piano black trim for a silver trim, and the rear view mirror is thicker due to the auto dimming mechanism inside.

The meter cluster on both cars sports the same housing but the innards are different. The hatchback is using the “Type-B” panel with a central speedometer but the sedan uses the “Type-A” panel where the rev counter takes center stage. On top of that, the High spec adds on a pop-up Active Driving Display that whirs into position every time you turn the ignition on.

Other than the extra driving comforts the sedan has to offer, both comes with six airbags, ISOFIX child seat anchors, and the usual ABS with EBD, BA, DSC, and TCS. The driving impressions for both cars are admirable and you can read more about it here. So which one is your pick? The plusher sedan or the sexier hatchback? 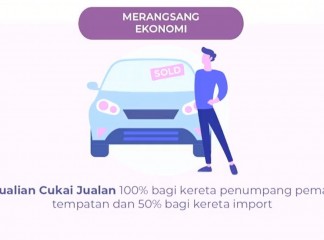 What would you pay for the all-new Toyota RAV4 when it...