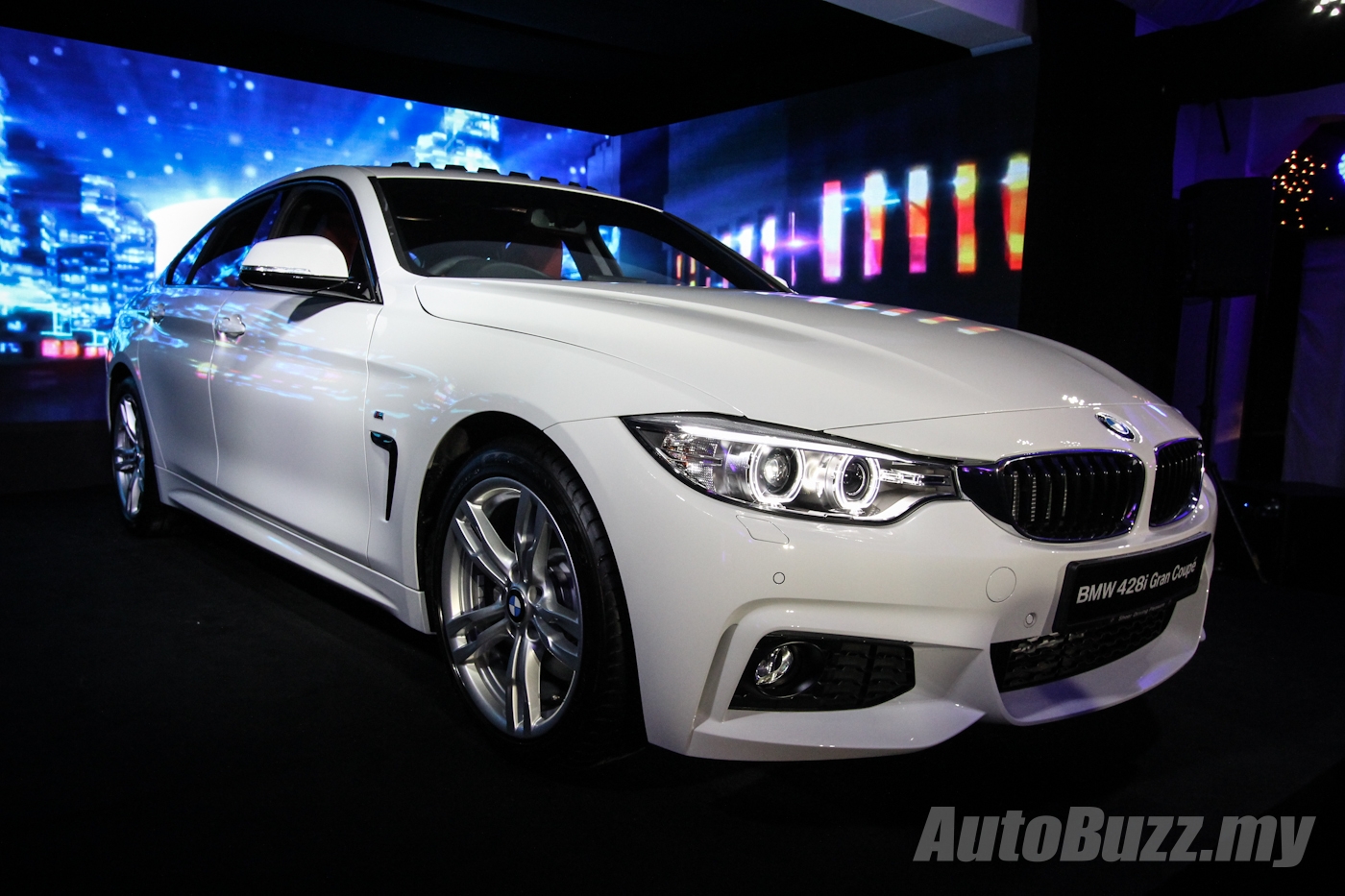 With the introduction of the new 4 Series range with the F32 Coupe and the F33 Convertible, the F36 Gran Coupe is busting another niche segment. The 4 Series Gran Coupe is the answer to those who wants exclusivity of a coupe, but with the practicality of a sedan.

The 428i Gran Coupe comes in the Sport Line guise, but there’s also the M Sport package option. Both run on 18-inch alloys but the design are different and M Sport’s rear wheels are an inch wider. M Sport also comes with sportier front and rear bumpers, BMW Individual high-gloss Shadow Line, and chromed tailpipes instead of black on the Sport Line.

The sports steering wheel comes with shift paddles (M Sport gets a different design and chunkier wheel), while almost everything else is controlled by the iDrive control system with Touch Controller. The 8.8 inch main screen also displays the map courtesy of Navigation system Professional.

Drivers will be glad that they will be able to choose from Comfort, ECO PRO, Sport, or Sport+ from the Driving Experience Control. Other creature comforts include full powered front seats, auto lights and wipers, front and rear parking sensors, cruise control, and two-zone climate control with air vents for rear passengers.

The back is not as cramped as one would assume, especially with the roofline that has been extended by 112mm giving the rear occupants adequate head room. BMW refers to the rear seat layout as a 2+1, rightfully so as it’s more cocooning to be in the back of the 4 Series Gran Coupe than the F30 3 Series Sedan. A 205W sound system with nine speakers offered as standard, but M sport gets a 600W Harman Kardon surround sound system with 16 speakers.

There’s a sensor below the rear bumper to detect foot movement to open up or close the boot. The bootspace is generous at 480 litres and can be increased up to 1,300 litres when the 60/40-split rear seats are folded down. ISOFIX mounts can be found at the rear seats as well. Additionally, there’s also a sunroof option on the M Sport.

A number of airbags reside in the cabin of the 4 Series Gran Coupe. This include front airbags for the driver and front passenger, side airbags in the front seats, and curtain airbags. Dynamic Stability Control (DSC) is standard, along with ABS, Cornering Brake Control (CBC), and Dynamic Traction Control (DTC).

The widely-used 2.0 litre four cylinder BMW TwinPower Turbo engine powers the 428i Gran Coupe. The turbocharged powerplant generates 245hp and 350Nm of torque with the claimed fuel consumption of 6.4 litre per 100km.

Paired with an 8-speed Steptronic transmission, the 428i Gran Coupe accelerates from 0 to 100km/h in 6.1 seconds and all the way to 250km/h top speed. An anticipatory gearshift strategy is also featured, where the gearshifts are pre-planned to match the road layout ahead based on the data from the navigation system.

Buyers can choose from five exterior colours namely Alpine White, Melbourne Red, Glacier Silver, Mineral Grey, and Jatoba Metallic. Another two colours Carbon Black and Estoril Blue are only offered exclusively on the M Sport. The 428i Gran Coupe Sport Line is priced at RM389,800 (on the road, without insurance, with BMW Service + Repair Inclusive (BS+RI) ) while additional RM29,000 buys you the M Sport package.