The arrival of a new hypercar marque in Malaysia has definitely created excitement among local car enthusiasts. What more, it is Swedish hypercar maker ‘Koenigsegg’, represented by official importer and distributor for Malaysia and Indonesia, Naza Swedish Motors. Unveiled recently in Malaysia is the Koenigsegg Agera S, by Naza Swedish and Christian von Koenigsegg, the founder of Koenigsegg Automotive AB.

AutoBuzz.my gets an interview with Christian von Koenigsegg and an exclusive walk-around with the 1030hp Koenigsegg Agera S.

The Agera made its world debut at the 2010 Geneva Motor Show. ‘Agera’ means ‘to take action‘ in Swedish. It features a Koenigsegg developed 5.0-litre variable geometry twin-turbo V8 engine, with  a newly developed 7-speed gearbox. It produces 910 hp. In 2011, the Agera was pumped up to 1140hp, the Agera R. That runs on E85 biofuel.

The Agera S was introduced in 2012 for countries where E85 biofuel doesn’t come by easily. Powered by a 5.0-liter twin turbo V8 petrol engine, it produces less power than its biofuel dependent sibling. The 100th Koenigsegg vehicle ever made was a Agera S in 2013, commemorated by a special built unit with gold leaf inlays named “Hundra” (Swedish for hundred).

Mr. Koenigsegg didn’t stop there. He then continues to achieve his dream of building the perfect sports car. In less than 20 years, he created the world’s first ‘megacar’, the One:1. The one to one ratio of power to weight, that’s 1 horsepower to 1 kilogram of weight. 1360 hp to 1360 kg ratio to be exact. That’s 1 Megawatt car.

Special thanks to Chirstian von Koenigsegg for his time and inspirational success story. 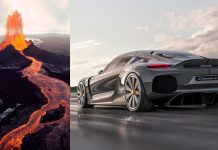