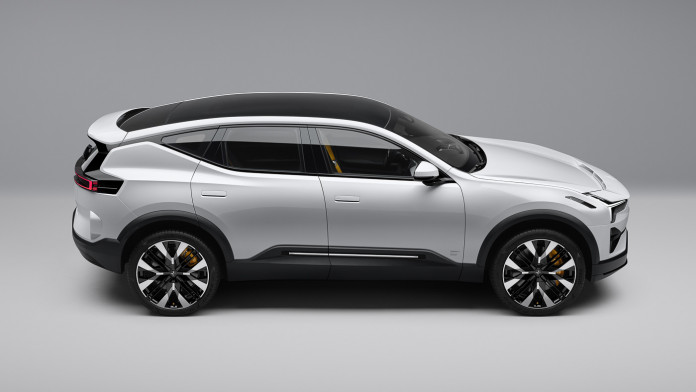 We know it’s hard to believe, but Polestar hasn’t made an SUV yet. Well, that’s about to change as its upcoming 3 will debut in October this year, and the premium EV maker has now given us our first (non-camouflaged) look at the “electric performance SUV”.

Only one image has been provided so far, and it’s the one above. The Polestar 3 looks similar in profile to the Volvo Concept Recharge that was unveiled last year, although it does seem to sport a more aggressive stance with wider rear haunches, a more aerodynamic roof, and a significantly more sculpted rear fascia.

Familiar Polestar design cues are also present here, including the Y-shaped LED headlights, yellow brake calipers, and full-width light-bar at the back. The entire top of the Polestar 3 is also covered by a single pane of glass, which appears to extend further backwards to form the raked rear windshield, passing underneath a prominent rear spoiler.

Not much has been revealed about the Polestar 3’s technical aspects just yet, but the company did mention that it’ll have a driving range of “over 600 km” delivered by a dual-motor set-up and a “large battery”. The Polestar 3 will also feature a “best-in-class” LiDAR sensor from Luminar, alongside powerful computing elements from NVIDIA to offer autonomous highway piloting.

ALSO READ: The Polestar 2 BST Edition 270 is what happens when you let engineers run wild

“Polestar 3 is the SUV for the electric age. Our design identity evolves with this high-end large luxury EV, with a strong, individual brand character,” says Polestar CEO, Thomas Ingenlath. “With this car, we bring the ‘sport’ back to the SUV, staying true to our performance roots.”

The Polestar 3 will be built on the second-generation Scalable Product Architecture (SPA2), and will be built in both USA and China alongside the next-generation Volvo XC90 – which it shares the platform with.

In related news, Polestar has announced that it will be expanding its global footprint to 30 markets by 2023, including Asia Pacific, which already saw the addition of South Korea, Singapore, Hong Kong, Australia, and New Zealand last year.