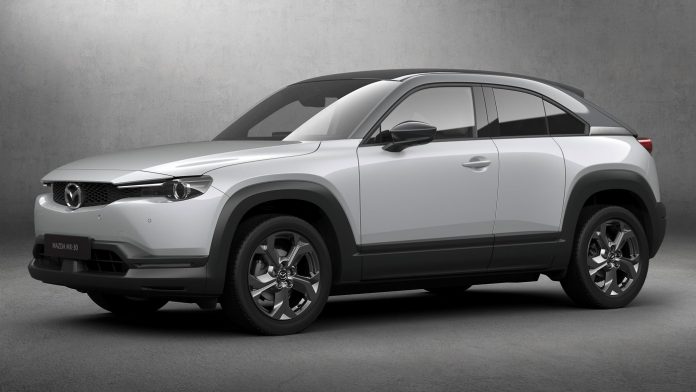 The Mazda MX-30 electric crossover has just been given a mild update in Europe for the 2022 model year, and when we say mild, we really do mean mild.

That’s because the biggest change on the 2022 Mazda MX-30 is it’s charging speed. Three-phase AC charging is now supported at up to 11 kW on the updated fully-electric crossover, up from 6.6 kW previously, while DC fast charging support has also been upped to 50 kW from 40 kW.

Oddly enough, the electric crossover has already been quoted in their press releases with a 50 kW fast charging support when it was officially launched in Europe and the United States previously, but with the same (slower) 36-minute charging time.

Either there’s been some miscommunication between departments within Mazda, or the MX-30 was silently revised internally with a slightly slower charger; the unit that was brought into Malaysia in April for a preview was quoted with a 40 kW DC fast charging support, but with the same 36-minute charging time.

RELATED: Mazda will unveil a rotary engine-powered range-extender EV in 2022

Other updates on the 2022 Mazda MX-30 include a revised drivetrain sound that’s supposed to help the driver “subconsciously recognise the amount of torque being generated by the power unit”. The company also says that the frequency has been optimised to sound more in tune with other car noises, such as wind or road noise.

The battery is still the same 35.5 kWh unit, so you won’t be getting any more range from a single charge (currently rated at 200 km based on the WLTP cycle), but at least you won’t have to wait as long as before to fully charge it. For a longer range, you’ll probably have to wait for the rotary-engined range-extender model, which has been confirmed to go on sale later this year.

As we briefly mentioned above, the fully-electric Mazda MX-30 has already been previewed here in Malaysia, and is slated to go on sale later this year. Not much information has been revealed just yet, but Bermaz Motor says that the fully-electric crossover will be priced under the RM200k mark.