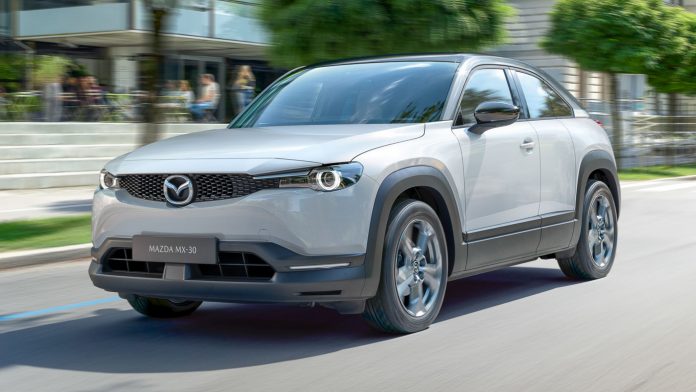 In what might be the world’s worst-kept secret, Mazda has now officially confirmed that its rotary engine-powered range-extender EV powertrain will be unveiled in 2022.

If you’ve been following the news, you’d know that this isn’t exactly new – in fact, the Japanese carmaker actually sneaked “Rotary Engine Range Extender” into the slides during the global unveiling of the MX-30 EV. However, Mazda has since mostly kept mum about its very existence, well, until now.

As part of its quarterly financial results briefing, Mazda included a slide on the company’s electrification plans. In which, Mazda CEO Akira Marumoto said that the company will introduce “mild-hybrids and plug-in hybrids for Large products, as well as multiple electrification technology utilising rotary engine” in 2022.

The statement stopped just short of expanding on what “multiple electrification technology” means, but based on previously-available information, it’s not hard to guess that they’re referring to the rotary engine range extender.

Other interesting things of note include the introduction of a “next generation” diesel engine, also in 2022, as well as the Mazda Co-Pilot Concept autonomous technology in 2025. The company also said that it’s committed to electrifying its entire vehicle line-up by 2030.

The Mazda MX-30 is powered by a 140 hp and 265 Nm electric motor driving the front wheels, with electric juice coming from a comparably tiny 35.5 kWh lithium-ion battery pack. As a result, the rated range of the MX-30 stands at only a measly 200 km per charge.

With a range-extender engine, which – in its most traditional form – functions solely by burning fossil fuels to charge the batteries, the range of the MX-30 can realistically be more than doubled, putting it more in-line with other EVs of the same size segment.

But why specifically a rotary engine? Well, aside from it being in Mazda’s wheelhouse, a rotary engine is also quieter and more refined than conventional engines. The rotational structure also produces more power than regular engines of comparable size, which means the range extender engine can be integrated into a small, compact unit, reducing weight and thus making the vehicle more efficient overall.

Either way, we’ll learn more about Mazda’s solution very soon, and we already can’t wait. Rotary is back!