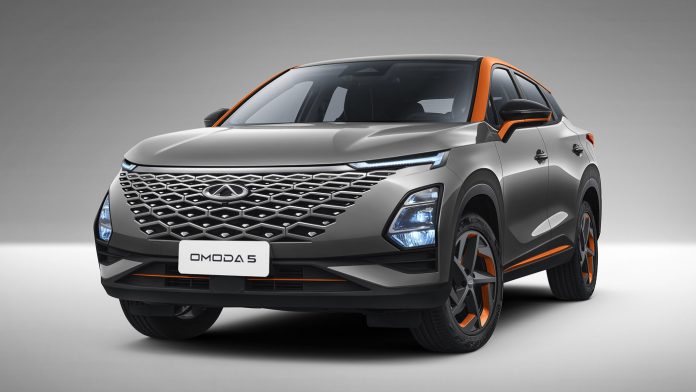 The B-segment SUV space in Malaysia is now the hottest market segment in Malaysia, with everyone wanting a slice of the pie. Just last month we saw the launch of the Peugeot 2008 and Toyota Corolla Cross Hybrid, and now Chery Malaysia has announced that the Omoda 5 will also be making its debut here, making us one of the crossover’s first international destinations alongside Australia, Europe, and Russia.

Production for the Omoda 5 has already begun, with the first unit rolling off the assembly line at Chery’s manufacturing headquarters in Anhui, China, last week.

Chery says that the Omoda 5 is their “first global model developed based on international demand”, and represents the beginning of the marque’s new Chery 4.0 era that is said to appeal to “young consumers in the 25-30 age group”.

According to Chery’s deputy GM Gao Xinhua, the Omoda 5 has been in development for 18 months to be a truly global product. It made its global debut only last year at the 2021 Guangzhou Auto Show, and since then has received good feedback both in China and abroad.

Chery’s international aspirations aren’t just marketing speak, too, as they’re clearly seen on the Omoda 5 from design to standard equipment with a significant focus on fancy styling touches and modern technology.

On the outside, Chery’s Art in Motion styling philosophy is highlighted through the massive borderless front grille that extends all the way to the slim Thor’s hammer-shaped LED daytime running lights, as well as funky sharp angles throughout the exterior.

As for tech, the Chery Omoda 5 is also fully loaded with modern equipment, including the matrix LED headlights and two 12.3-inch displays in the posh-looking cabin for its instrument cluster and infotainment display – the latter also supports Apple CarPlay connectivity.

Underneath the bonnet, the Chery Omoda 5 is powered by a 1.6-litre turbocharged petrol engine that produces 197 hp and 290 Nm of torque, with drive sent to the front wheels via a seven-speed dual-clutch transmission. The company is also planning to introduce a hybrid-powered variant in the future.

No information has been provided on the Malaysia-bound model yet, but it seems like we don’t have to wait too much longer. Keep your eyes peeled!