The BMW iX was launched here in Malaysia quite some time ago now – August 26th of last year, to be exact. However, since the car is fully imported from Germany in low quantities, there hasn’t really been a chance to check it out in person yet, until today.

BMW Malaysia, at their NEXTGen Malaysia event today, brought out the trio of their latest electrified models for the media to put their grubby hands all over, so we took the opportunity to bring you a set of photos to show you what’s so special about their new electric flagship!

Right off the bat, we have to address the elephant in the room – the huge kidney grille in front. Accept it, we’re not moving away from this new shouty design, or at least not in the near future. So our only choice is to just accept it and move on – not that I really had too much of a problem with it in the first place.

At least, BMW tries to make it a little bit more stylish here, with the gloss black acrylic cover taking on a triangular mesh design. It’s functional too – the advanced driver assistance features’ cameras and sensors are all hidden neatly behind the cover – something they like to call “shy tech”.

In terms of size, BMW says that it’s roughly similar to the X5 SUV, although with a height of the X6, and a larger wheelhouse size of the X7. Proportion wise, the A-pillars here have also been pushed slightly forward to give it a shorter bonnet and a larger passenger compartment, and as a result it does look a little more MPV than SUV in our opinion.

The unit that was shown off today was the xDrive40 Sport variant, which comes with the Sport Line bodykit, fancier-looking BMW LaserLight headlights, and larger 22-inch wheels.

Still not a fan of the exterior? Take a look inside, and I guarantee it’ll change your mind. The cabin is designed to look and feel like a lounge, and the dashboard architecture plus the new iDrive 8 infotainment curved display panel just makes the whole look work.

But the main highlight for us in the BMW iX’s cabin is without a doubt the crystal knob for the iDrive controller that comes together with the Sport package. The way it’s designed makes it look and function like a crystal puck just floating above real wood panel underneath it – flashy, clean, and futuristic all at the same time!

RELATED: Check out the iDrive 8 system in action here!

Other interior niceties include the electrochromic panoramic sunroof that turns opaque at a touch (literally) of a button, two USB-C ports behind every seat, and most importantly, the absolute tonne of space that’s exaggerated by the flat cabin floor – even in the front seats.

A higher-end xDrive50 model will also be offered in Malaysia, which will pack more performance and a larger battery – however it’s still currently not available on our shores just yet.

With the recently-announced tax exemption for EVs starting from this year as part of Budget 2022, the BMW iX xDrive40 now starts at RM361,430, on-the-road without insurance, which is RM58,200 lesser than when it was first announced here in Malaysia back in August last year.

And when you tick the Sport package box at checkout, the price goes up to just RM407,430 (+RM46k), or a whopping RM65,200 cheaper than before! A bargain, if you ask us, especially after seeing it in person today. All you have to do is get over its looks… 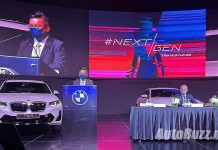