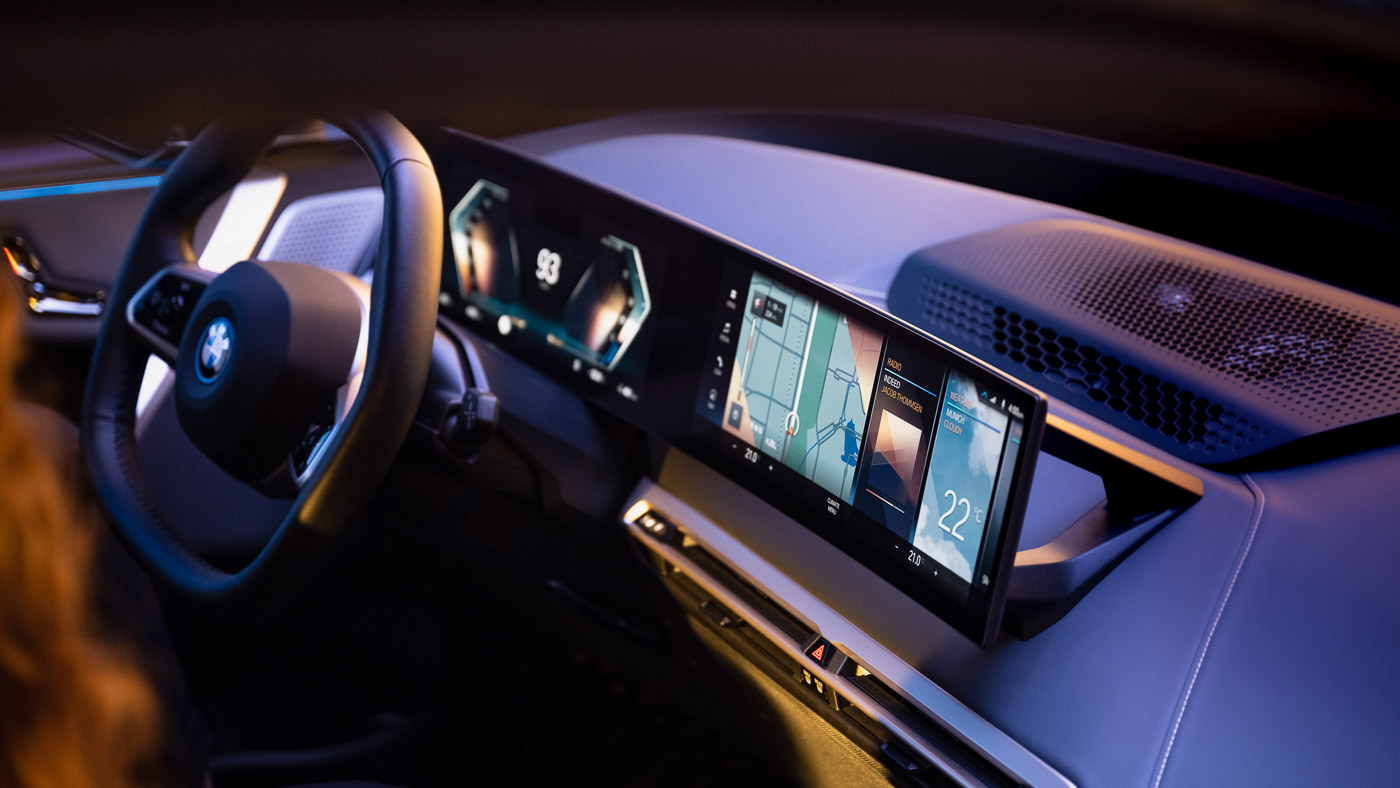 BMW’s iDrive infotainment system, particularly in its Operating System 7.0 version, has always been rated as one of the best in the biz, with intuitive controls and clear graphics, putting it ahead of its competition. With the upcoming iX and i4 EVs just about to hit the market, BMW has given the operating system a complete rework, with a new control system that feels almost like you’re talking to Tony Stark’s JARVIS.

The new BMW iDrive system is characterised by the BMW Curved Display, a curved pane of glass sitting atop the dashboard that combines a 12.3-inch “information display” (instrument cluster) and a 14.9-inch “control display” (infotainment touchscreen) into a single unit. In classic BMW fashion, the curved display is of course, angled towards the driver for better ergonomics.

The system gets new eye-catching graphics to go along with the new, larger displays. But despite more screen real estate, BMW says that the user interface has been optimised to “present the right amount of information”, preventing information overload by pre-filtering only the information relevant to the driving situation at the current time.

Drivers can choose between three display layouts – Focus, Drive, and Gallery – which alters the number of information and widgets being shown to the driver on the two screens. BMW says that they are catered to different “driving situations”, with the Focus layout designed for “extremely dynamic driving situation”.

The Gallery layout is the complete opposite, with minimal driving information to clear out as much space as possible for widget content. In a future where cars can basically drive themselves, this probably makes quite a bit of sense.

While the familiar rotary controller is still here, now in a fancy glass-effect finish, BMW says that the number of physical buttons and switches have been “reduced by almost half”. Even the remaining “physical” controls are of the capacitive touch buttons variety, with almost zero delineation and tiny labels. Once you’ve stopped yourself from physically wincing, read on.

The best way to control almost everything in the car, according to BMW, is to utilise the new and improved Intelligent Personal Assistant feature. Flexing its artificial intelligence muscles, BMW says that the new personal assistant automatically adjusts to the driver’s individual needs and routines, as well as the situation at hand, giving you the right answers at the right time.

The personal assistant has been updated to better understand natural language, and now even gets a new “face”, made up of a cluster of light spheres floating across the display. BMW says that this improves the interaction between human and machine, as it is able to react to your voice inputs in a visual way – like how we can pick up emotions by watching one’s facial expressions.

All of these new smart features will continuously improve over time, as the system gets more data and information from both the car itself, and the entire BMW Group vehicle fleet of over 440 million customer journeys across the globe.

This system recognises repetitive situations and learns from them, with all of these adjustments registered by the system and stored in the user’s own BMW ID profile. For example, the BMW Maps included in the all-new iDrive will automatically learn your common routes, and will automatically suggest destinations – such as daily commute to work – based on the context of the drive, such as the day and time.

Even the climate control is tied in to the AI-powered system, with the software automatically learning the user’s preferences such as fan speed and air distribution, seats and surface heating and ventilation, even taking into the intensity and direction of the sunlight! BMW says that with everything working correctly, customers should seldom need to adjust any of the climate control settings, so it’s OK to jettison those controls.

All of these settings are automatically adjusted to the user, even before they enter the car. The car utilises ultra-wide band signals (found on the latest iPhones, for example) to detect the approaching driver, and does a whole song and dance sequence called “Great Entrance Moments”, utilising lights both inside and outside the car to “welcome the driver and invites them into the vehicle with a thoroughly choreographed routine”.

As our cars become increasingly smarter and automated, the software and overall user experience will become vital to how we interact with our cars – they’re no longer just mechanical machineries any more. It will be interesting to see what these traditional carmakers come up with in the near future, especially as we move into the new era of electrified vehicles.

Most brands – including Mercedes-Benz – seem to trend towards utilising some combination of artificial intelligence and personal assistants to help users navigate around the increasingly complicating system, though only time will tell if that’s the right way forward. What do you think of BMW’s new iDrive system?