You’ve probably been seeing this car a lot on social media feeds lately, but with a face this handsome, it’s not hard to see why. Bermaz Auto Alliance – the new sole distributor of Peugeot vehicles in Malaysia – has just unveiled the 2021 Peugeot 3008 facelift here in Malaysia, and it’s offered in a sole Allure variant, priced at RM161,617 on the road, without insurance, and inclusive of SST exemptions.

The standout highlight of the facelift exercise is without a doubt its new front fascia, featuring what Peugeot calls a “borderless grille” design that spans across the entire front end. Also new on the Peugeot 3008 facelift are its exterior lighting elements, including a new Lion Fangs headlight assembly, plus the three-dimensional claw taillights at the back.

Underneath the bonnet, though, lies the unchanged 1.6-litre Turbo High Pressure (THP) inline-four engine from its pre-facelift model that serves up 165 hp and 240 Nm of torque. Power is sent to the front wheels via a six-speed automatic gearbox for a 0-100 km/h time of 8.9 seconds, onward to a top speed of 205 km/h.

How does the new Peugeot 3008 drive? Check out our video here!

While the updates on its exterior are quite significant, the cabin of the Peugeot 3008 facelift remains largely unchanged from its pre-facelift model. Key upgrades include the now-larger 10-inch touchscreen infotainment display, alongside a new Qi wireless charging pad underneath the centre stack.

The Peugeot 3008 retails for RM161, 617 on the road, without insurance, and inclusive of the sales tax exemptions. The price also includes a five-year/100,000 km warranty, alongside a three-year/60,000 km free scheduled service programme.

For the full specifications breakdown of the new Peugeot 3008 facelift in Malaysia, check out our launch coverage here. 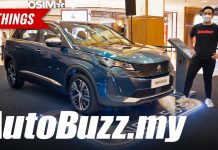 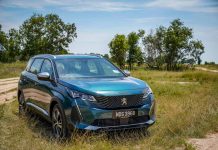