After a full month of operations in September, after the auto industry was allowed to resume at the end of August, UMW Toyota Motor has announced a jump in total sales volume.

Compared to the same January to September period of 2020, UMW Toyota also recorded higher figures. Sales of Toyota and Lexus vehicles were 43,594 units in 2021, compared to 25,978

“We are certainly pleased to see the market steadily moving towards normalcy as the past few months have been challenging for us. Our showrooms have been open and receiving many customers daily. Bookings for the latest models have also been increasing. As a result, our total sales in September for Toyota and Lexus vehicles was a phenomenal 223% greater than the August volume,” said UMW Toyota Motor, President of UMW Toyota Motor, Ravindran. K.

Toyota’s Kinto One subscription service in Malaysia now offers even more flexibility. Read about it here!

“I would like to assure our customers that they will be safe and protected when they visit our showrooms or service centres but at the same time, we remind them that they need to comply with the SOPs. This means having temperature scans and registering their visit using the MySejahtera app, as well as using hand sanitisers and wearing face masks at all times,” he added.

In conjunction with its showrooms reopening, UMWT launched the “Visit & Win” promotion with a total grand prize of RM30,000. Simply upload an image of yourself at the showroom, on Facebook, or Instagram with a caption. Once uploaded, simply share the URL link to UMW Toyota representatives.

The Toyota Corolla is the last car we’d expect to get a “Nürburgring Package”. Read about it here! 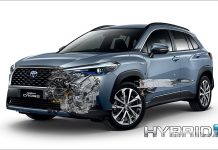 Toyota Corolla Cross Hybrid has lower horsepower figures than standard 1.8…but why?