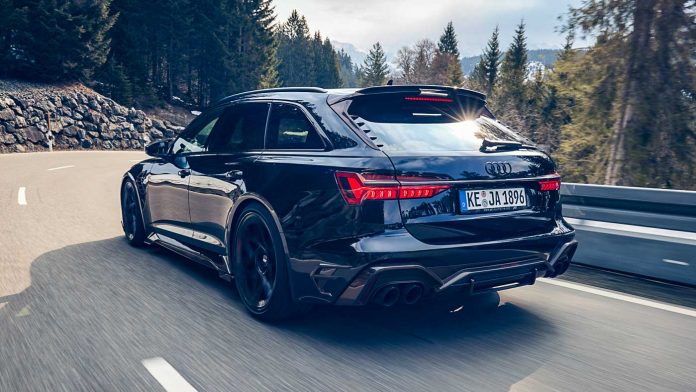 Known for their work on Volkswagen, SEAT and more famously Audi vehicles, ABT Sportsline has given birth to yet another fire-breathing monster. This time, they’ve turned the Audi RS6 station wagon into a fire-breathing 800 hp / 980 Nm land jet.

It’s called the RS6 Johann Abt Signature Edition – named after the founder Johann Abt who founded the company back in 1896 – to celebrate the company’s 125th anniversary this year. The company started off making sleighs and horseshoes before the turn of the 19th century.

Only 64 units will ever be built, at the rate of six cars per month, to commemorate the age of the late founder. Just a week into the launch, they have all been snapped up. Sorry.

The performance numbers are so staggering it makes you forget that this is ultimately a station wagon for taking your kids to the park or to a holiday.

“The anniversary model has shortened this time by over 20 seconds compared to the production model”, the ABT Sportsline, CEO, Hans-Jürgen Abt claimed.

Within 28 seconds, it will be touching the 300 km/h mark. Again, station wagon. Top speed? Side by side with the recently launched Ferrari SF90 Spider at 330 km/h.

Of course, all that power is accompanied by aural drama from an ABT exhaust system, with massive quad 102 mm tail pipes.

ABT height-adjustable springs and anti-roll bars more control of the car with all the additional power. The special edition also comes with an aero package that not only looks aggressive but has been tested in a wind tunnel to provide 150 kg of downforce to the rear end of the car.

The interior and exterior is garnished with the company’s Signature Carbon Red carbon fibre trims. Even the 22-inch wheels have been developed in-house specially for the special edition tribute car.

“Technically, we have pulled out all the stops and have been able to make a weight saving of an incredible 3.5 kg per wheel, compared to the standard wheels”, explains Abt.

And we’ve saved the best of the last! The icing on the cake for each of the 64 units is a relic used by the founder himself over a century ago! On the centre console of every unit lies a small fragment of Johann ABT’s first-ever anvil, and of course, with consecutive numbering.

Hans-Jürgen Abt explained, “Johann Abt’s first anvil provided many years of loyal service. On this anvil, my great grandfather transformed his vision into innovation. It is an irreplaceable piece of history that has now earned a worthy place for eternity: not in the museum, but in the most exclusive ABT of all time.”