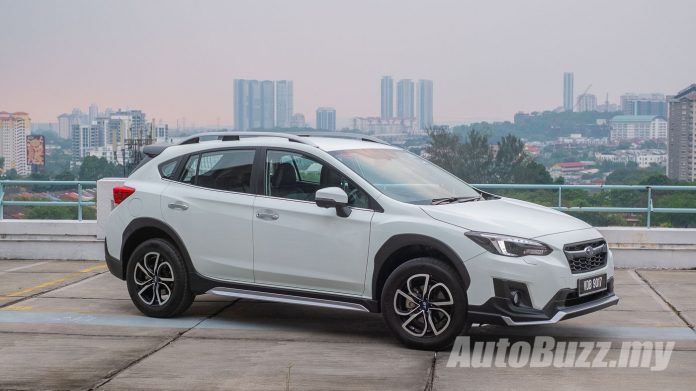 The second-generation Subaru XV was launched here in Malaysia back in 2017, and even though there were several updates along the way, the car by and large stayed the same throughout its four years of existence here in our country. But that’s not really a bad thing though, is it? As the saying goes: if it’s not broken, don’t fix it.

And the Subaru XV is certainly not broken. In fact, we’ve had many good things to say about it in the past – just have a look at our previous reviews, in both written and video form. Recently, we had the opportunity to sample the compact SUV once again in the prettier GT Edition form, which reminded us why we liked it that much the first go-around.

But as we’ve mentioned, the Subaru XV did not see that many changes over the years, so instead of another review with us repeating the same things over and over again, we thought we’ll switch things around this time, and try to figure out who the Subaru XV is for.

There’s a reason why almost everyone is buying an SUV these days – the convenience benefits are just too hard to ignore, even if I don’t personally prefer them. Primarily, its taller ride height means getting in and out of the car is a lot easier, especially for the elderly folks, or those carrying toddlers.

An SUV also usually means more space, and that’s also the case here. Being slightly larger than most of its competitor, the Subaru XV offers one of the best interior space within its segment, highlighted by the impressive legroom, knee room, and headroom for the back passengers. Despite the title above, we’d wager that even a group of adults wouldn’t find anything to complain about, space wise.

The cargo room at the back however, does suffer a little due to the XV’s all-wheel drive system. Coming in at 385 litres, the boot space is admittedly quite snug compared to its rivals. But on shorter trips, it should still have sufficient luggage space for a small family, especially if you’re willing to play some luggage tetris. Fortunately, the large aperture makes that process pretty painless.

For those who revel in the great outdoors; those who much prefer to spend their weekends off the beaten path rather than yet another shopping mall, there’s no better choice in this segment for you than the Subaru XV.

The reason is none other than Subaru’s famed symmetrical AWD system. Specifically for off-road driving, the XV comes with an “X-Mode” switch that adapts the system to provide optimal traction for trickier terrains. But for most surfaces, including loose gravel roads, “normal” mode seems to already do a stellar job.

Impressed? Wait until you realise that it’s all done on regular road-going tyres. After your weekend getaway, you can still drive home on the highways in complete comfort, without the noise and harshness from a more off-road oriented tyres. The Subaru XV is truly an every day go-anywhere compact SUV – and not just a “crossover” like most of its competitors.

They say that beauty lies in the eyes of the beholder, but most people would probably agree that the Proton X50 looks better than the Subaru XV. Don’t get me wrong, the Subaru XV is not a bad looking car – in fact, we do quite like how the additional GT Edition kit adds that little bit more pizazz. But when compared to its chief rivals, it’ll never come out ahead in a beauty contest.

And truthfully, that’s okay – because the XV is a car built for maximum functionality with zero fuss; aesthetics come second. As we’ve already mentioned above, it’s designed to take a beating, not just to shuffle the family to and fro shopping malls.

Take for example the additional display above the dashboard, which looks like it came straight out of a 90s sci-fi movie. Call it geeky, but it puts all of your crucial driving information – from water temperature to even your pitch and roll angles – right where your peripheral vision would be while driving.

It’s hard to ingore that the Subaru XV lacks the “wow” factor car buyers – especially the younger crowd – seem to seek for, but that’s only because all of the investment were made to perfect what’s underneath the car.

Don’t you just hate how every time you come to a corner, you’ll have to tap on the brakes to slow down your car, just so you’ll make it through safely? Well, good news – when you drive a Subaru XV, you’ll never have to worry about replacing your brake pads.

We kid, but there’s actually some truth in that statement. And once again, the secrets sauce comes in the form of the Symmetrical AWD system. Unlike most other all-wheel drive SUVs that are mostly front-wheel drive in normal circumstances, Subaru’s solution sends power to all four wheels, all of the time.

The system constantly manipulates the torque distribution, sending power to the wheel with the most traction at any given moment, helping the car keep its line no matter rain or shine. If you have the chance to test drive the Subaru XV, bring it to a roundabout and you’ll know what we mean.

Not only does it turn in like a pouncing tiger on faster entries, the XV seemingly just sticks onto the tarmac like magic as you gradually increase your speed through the roundabout too.

Believe us when we say this – the amount of speed that the XV can handle through corners can seriously mess with your head, even to the point of you forgetting how to drive a “normal” car after this – true story. We’ve been there, so consider this a public service announcement.

No, you did not read that wrongly. Common sense would tell you that a tall-riding SUV can never handle well, but the Subaru XV defies all logic. Not only does it have the grip to hold on to the road, it actually feels exciting to drive too – especially when it’s pushed to its limits.

A huge contributor to the XV’s handling chops is its beating heart, the 2.0-litre boxer engine. Due to its horizontally-opposed piston layout, the boxer engine can be placed much lower within the engine bay, significantly lowering the centre of gravity of the car, which in turn reduces the body roll.

In fact, Subaru says that the second-generation XV has 50% lesser body roll than the model it replaces – and that’s even with a softer-sprung suspension set-up, made possible by a significantly more rigid chassis.

“But wait, doesn’t the Subaru XV come with a CVT gearbox?” Indeed it does, and while I myself am not usually a fan of the unlimited-ratio gearbox, it’s important to remember that not all CVTs are created equal – and Subaru’s Lineartronic CVT is perhaps one of the best in the market.

CVT gearboxes gets a bad rep due to the notorious rubber band effect, but its basically non-existent here on the Subaru XV. Power is delivered completely in tandem with your right foot and the engine revs, working together with the all-wheel drive system to give you extra confidence pouncing out of corners.

So there you have it, the five types of drivers that would be a perfect match for the Subaru XV. Do you agree with our list? Let us know in the comments section below if we’ve missed out anything!