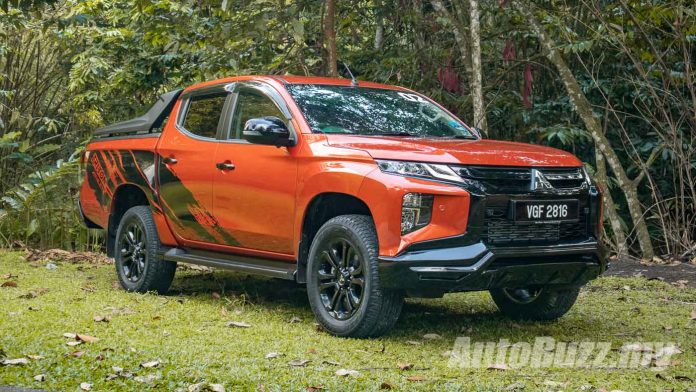 Mitsubishi Motors Malaysia has just unveiled its new flagship pick-up truck here on our shores, the Triton Athlete, replacing the outgoing Adventure X variant for the 2021 model year. Changes are all on its aesthetics, with no mechanical differences between the two – so it’s a good thing this new one looks this good.

On the front, the new Triton Athlete gets a new blacked out Dynamic Shield fascia, characterised by the new front under garnish for a more rugged, bash plate-esque look. The black accents extend into the bi-LED projector headlights, which looks especially sharp when contrasted by the white daytime-running lights.

By now, you probably would’ve realised that the blacked-out items are all part of the whole “rugged” Triton Athlete image – the same colour theme is also found on the door handles, wing mirror housing, side steps, aero door visors, rear bumpers, and most obviously on this orange unit, the Triton Athlete decals at the rear section of the side.

The Triton Athlete decals are actually in a different colour on each of the three exterior colour options – Sun Flare Orange, White Diamond, and Jet Black Mica. As for the wheels, while still sized at 18-inch and featuring the same multi-spoke design, also gets the same blacked-out treatment.

Moving inside, the differences on the new Mitsubishi Triton Athlete are a lot more “tame” compared to the new exterior styling, with only some additional orange cross-stitching on the steering wheel, gear shift lever, and handbrake lever, alongside a light-up ‘Triton’ sill plate.

Otherwise, the rest of the interior is pretty much a carbon copy from the outgoing Adventure X variant, with all of the variant-specific goodies such as the forward-facing dashcam, 360-degree surround view monitor, and the solar/security tint being included as standard.

As mentioned, the mechanical bits are also all unchanged on the new model. The Mitsubishi Triton Athlete is powered by a 2.4-litre MIVEC turbo engine, pushing out 181 hp and 430 Nm to all four wheels via a six-speed automatic gearbox (with gearshift pedals).

With this being the new range-topping variant, the Triton Athlete also comes equipped with the Super Select II all-wheel drive system with hill-descent control and individual driving modes for various loose surfaces. Having spent a whole day off-roading (as a newbie) as part of the media drive, I’ve got to say that the technology smarts definitely saved me quite a few times in the jungle.

The Mitsubishi Triton Athlete is now available in Malaysia, priced at RM141,500, making it a RM3,600 premium over the outgoing Adventure X. Included in the price is also a five-year/200,000 km warranty coverage. So what do you say? Let us know in the comments down below!