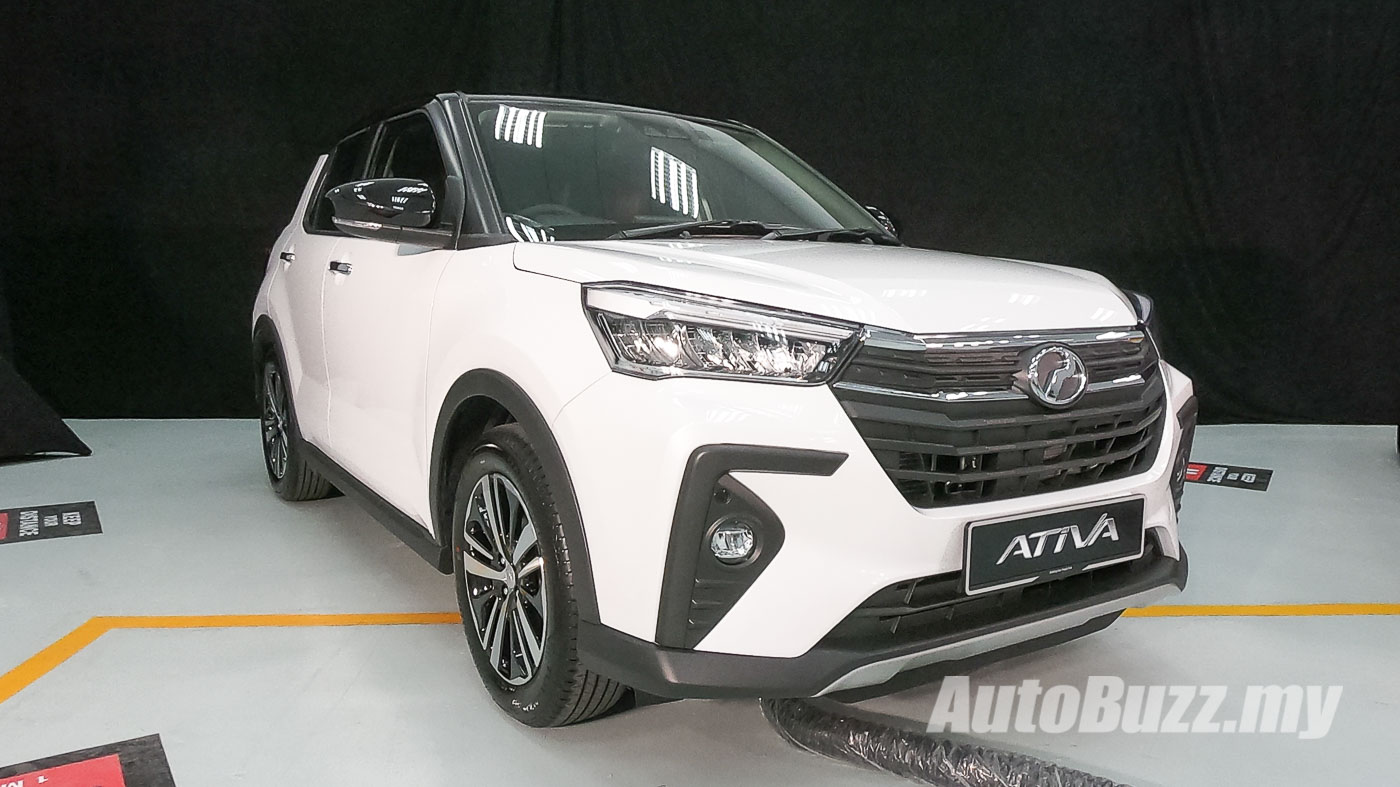 Here it is, at long last – the heavily-rumoured, long-awaited Perodua compact SUV. And as the leaks suggested, it’s called the Ativa, which is the Portuguese word for “Active”.

The Perodua Ativa will be available in three variants – X, H, and AV – with prices ranging from RM61,500 to RM72,000 with all the options ticked.

While the Perodua Ativa is based on the Japanese-market Daihatsu Rocky (and Toyota Raize), designers at Perodua have given the Ativa its own design touches to differentiate it from its cousins.

These changes include a redesigned front grille that has been stretched out towards the two LED headlights (unchanged from Rocky), a unique front bumper design with triangular-shaped fog lamp housings, and surrounded by L-shaped trims around the top, similar the updated Perodua Bezza.

Similarly, the rear bumper on the all-new Ativa also gets several Perodua-exclusive touches. The chunky black plastic “vents” on the sides are replaced by sleeker L-shaped trims to house the fog lamps, and moving further down, the number plate section is slightly reshaped (less angular compared to the Rocky), and is accented with a satin silver trim underneath.

In terms of exterior features, the all-new Perodua compact crossover is fairly well-equipped across the board, with LED headlights (with automatic high beam!) and rear combination lights, and even electrostatic-activated door handles (for keyless entry) coming in as standard features.

Moving up to the H variant will net you automatic head lights with adaptive driving beam (automatically disabling certain beams to prevent dazzling other drivers), sequential turn indicators, as well as larger 17-inch alloys – which are Perodua-designed items as well.

Stepping up all the way to the range-topping AV, and you can stand out even more from the crowd with the optional two-tone black roof. The full exterior colour options are as below:

Among the many firsts on the Ativa, its powertrain is perhaps one of the most significant one, as it will be powered by Perodua’s first ever turbocharged engine, mated to a D-CVT gearbox – also a first for the national carmaker.

While no performance figures were provided, Perodua says that the performance of this turbocharged three-banger is similar to its previous 1.5-litre naturally-aspirated engines. There’s even a “Power Mode” button to perk up the engine and throttle response.

The D-CVT (Dual-mode DVT) is also unique in operation compared to regular CVT gearboxes, by using split gears in addition to regular belts on higher loads and speeds for increased efficiency and lower noise, while still maintaining the smooth CVT acceleration at low speeds.

Aside from just powertrain, the Perodua Ativa also sees significant improvements to its ride and handling capabilities. This is in large due to the new DNGA platform underneath, which significantly increases body rigidity, while at the same time improving collision safety and NVH levels.

While the exterior sees significant changes in design, the cabin of the Perodua Ativa does remain quite faithful to its Japanese cousins, particularly on the dashboard design. Changes here are mostly functional, such as the climate control panel, similar to that of the Perodua Myvi.

Standard equipment on the entry-level X variant include a basic head-unit with FM/AM and an analogue instrument cluster with a 4.2-inch multi-info display. But step up to the H and AV variants though, and the cabin immediately elevates into a 21-century-ready interior, thanks to these new interior kit:

The Perodua Ativa also boasts significant cabin space on the inside, particularly with a “couple distance” (space between the centre of front and rear seats) of 900 mm, perfect for families requiring child seats. The boot space of 369 litres (with false floor at lowest setting) is also the biggest in its class according to Perodua.

The Ativa already sounds pretty good so far, but we have not even got to its most impressive part yet – its standard safety features. Perodua’s Advanced Safety Assist (ASA) system, now in its third generation, is now standard across the board. The ASA 3.0 features have also been updated for better performance, now with support for motorcycle and bicycle detection, as well as night-time operation. These features include:

The top-of-the-line Perodua Ativa gets even more goodies on the active safety front, with the following new features being added:

With the new features, the Perodua Ativa AV takes the crown for the cheapest car on sale here in Malaysia to offer level 2 autonomous driving capabilities!

Pricing for the Perodua Ativa starts from RM61,500, topping out at RM72,000 for the AV variant, with all the options checked.

All prices listed above are on the road prices, without insurance, and inclusive of the sales tax exemptions. Also included in the price is a five-year/150,000 km warranty.

The “Special Metallic” colour options exclusive to the H and AV variants – Delima Red Metallic and Pearl White Metallic – will cost an additional RM500 on top of the base price, while the two-tone roof option is another RM300 on top of that, bringing the price up to RM72,000.