We knew it was happening, but it’s still sad to see. Shortly after the official announcement that the Exige and Elise will go out of production after this year, Lotus has now introduced several special “Final Edition” versions to bid farewell to the beloved sports cars.

A total of five Final Edition variants are being made in “limited numbers”, two for the Elise and three for Exige, all offered with unique paint colours, new exterior kit, exclusive badging and plaques, and extra power – reflected in their new names.

For the Lotus Elise, The range starts off with the Elise Sport 240, which replaces the outgoing Sport 220. As the name suggests, the Toyota-sourced 1.8-litre supercharged four-cylinder engine has been tuned for more power, now making 243 hp (240 bhp) and 244 Nm of torque.

Thanks to the 23 extra ponies, 0-100 km/h sprint now takes 4.1 seconds, onward to a higher top speed of 237 km/h. But more power isn’t the only thing that’s going for the new Elise Sport 240; it now also boasts a weight-to-power ratio of just 264 hp/tonne, thanks to various lightweighting measures, such as the new 10-spoke Anthracite lightweight forged alloy wheels which are 0.5 kg lighter each corner, dropping total weight down to 922 kg.

Further weight savings can be had if you opt for the optional carbon fibre sill covers and engine cover, lithium-ion battery, and lightweight polycarbonate rear window, which further drops the mass of the Elise Sport 240 down to 898 kg.

Next up on the list is the Elise Cup 250, which sees a modest gain of 2 hp over the outgoing model, now making 248 hp and 244 Nm from the same 1.8-litre supercharged mill.

However, the key focus on the Elise Cup is in its aerodynamic department, which sees the inclusion of a new front splitter, rear wing, rear diffuser, and side floor extension. All in, the Final Edition Elise cup makes a total of 66 kg of downforce at 160 km/h, and 155 kg of downforce at its 248 km/h top speed.

Just like the Sport 240, a variety of other lightweight carbon fibre options are available for the new Elise cup, further reducing the weight to just 931 kg.

Celebrating 25 years since the introduction of the nameplate, both the Final Edition variants of the Elise will be offered in several exclusive colours, including Azure Blue, the colours used in the first production car images provided to the media in 1996; Black, the official brand colour of Lotus’ motorsport division; and Racing Green, the colour of the original Elise unveiled at the 1995 Frankfurt Motor Show.

The Final Edition Lotus Elises also get additional standard equipment on the interior, including a new digital instrument cluster, alongside a new flat-bottom steering wheel design wrapped in leather and Alcantara, as well as new seat trim and stitch patterns.

The Exige Sport 390 replaces the outgoing Exige Sport 380, featuring a revised Edelbrock supercharger to provide 402 hp and 420 Nm of torque, translating to a century sprint time of 3.7 seconds, onward to a top speed of 277 km/h.

Last but definitely not the least is the Exige Cup 430, the flagship track-focused model of the line-up. Power output is unchanged at 436 hp and 440 Nm, and so are the top speed (280 km/h) and century sprint time (3.3 seconds).

With the motorsport-grade carbon fibre front splitter, front access panel, roof, diffuser surround, enlarged air-intake side pods, one-piece tailgate and race-derived rear wing, the Exige Cup 430 boasts a massive 76 kg downforce at the front, and a further 95 kg at the rear, giving a total of 171 kg of downforce at its top speed – all on a car that weighs just a pip over one tonne.

All of the handling goodies from the Sport 420 is also carried over here, but the Exige Cup 430 benefits from a high-flow titanium exhaust system as standard, alongside a motorsport-derived variable traction control, with five pre-set traction levels controlled via a rotary switch on the steering column.

Just like the Elise Final Edition models, the Exige variants are also offered in several iconic colourways, including Metallic White from the unveiling of the V6 Exige at the 2011 Frankfurt Motor Show, and Metallic Orange, used on the first press fleet car in 2000 and the Exige GT3 concept.

With the production for the Elise and Exige slated to end later this year, Lotus estimates that they would have made around 55,000 of these cars in total – accounting for more than half of all Lotus road cars ever produced since the first Lotus in 1948.

While we’re certainly sad to see the end of an era, Lotus is already hard at work in anticipation of its new chapter of sports cars, starting with the Type 131. We can’t wait to see what’s on offer from Lotus in the near future, but for now, goodbye, old friend. 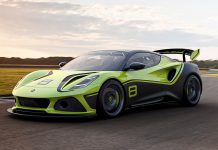