The first locally-assembled (CKD) Mitsubishi Xpander has officially rolled off the assembly line, marking the start of mass production at the Hicom Automotive Manufacturing plant in Pekan, Pahang – the third country to assemble the seven-seater crossover after Indonesia and Vietnam.

Mitsubishi Motors Malaysia (MMM) has invested in a new body shop, painting jigs, and tester line at the Pekan Plant, which is designed for a production capacity of 6,000 units annually. Hailed as one of the most advanced paint shops in ASEAN, the locally-assembled Mitsubishi Xpander also undergoes pre-treatment and electro-deposition process, where it performs a “360-degree somersault” in an ED coat tank during the production process.

A layer of primer is then painted by a robotic system and then dried heated in an oven bay. Thereafter, the Xpander is painted again with multiple coats to a fine finish. Mitsubishi Motors Corporation (MMC) certified auditors are also stationed at the assembly plant to ensure that the production of the seven-seater crossover is up to standards and quality of Mitsubishi Motors production worldwide.

MMM Chief Executive Officer, Tomoyuki Shinnishi said, “The Xpander is a significant model for MMM and we are confident that it will be a favourite among many Malaysians. The move to localise the Xpander is to meet the demands of our Malaysian customers. We want to offer more price competitive model with better specifications providing customers more convenience and comfort.”

“We ensure all our customers that each unit of the Xpander undergoes extensive quality control tests, before it is shipped out. Every inch is checked by human-eyes and cutting-edge technology.”

MMM hopes to mirror the success of the Mitsubishi Xpander in the region, which has seen approximately 270,000 units sold in Indonesia (including Xpander Cross) since the model’s introduction in 2017. Locally, the CKD Mitsubishi Xpander will only be offered in just one variant at launch. It will be powered by a 1.5 litre naturally-aspirated engine, good for 105 hp and 141 Nm of torque, with power sent to the front axle via a four-speed automatic gearbox.

The Mitsubishi Xpander will arrive in Malaysia in the facelifted form – which can be seen from the updated LED headlights and U-shaped louvres on the grille. Other exterior highlights – aside from the striking Dynamic Shield face – include LED taillights, and 16-inch dual-tone alloy wheels.

The Malaysian-specification CKD Mitsubishi Xpander also receives several unique features and equipment, including black quilted leather seats, 360-degree 3D around-view monitor, built-in dashcam, as well as a nine-inch infotainment system with Apple CarPlay and Android Auto – making it one of the few vehicles on sale in Malaysia under the RM100k mark (if estimated pricing is accurate) to come with these connectivity features.

The full-list of equipment and features is available at our write-up over here. The Mitsubishi Xpander has been open for booking since last week, although no pricing information has been announced just yet – though it has been hinted to fall underneath the RM100k mark. MMM says that the launch of the Mitsubishi Xpander is targeted for next month. 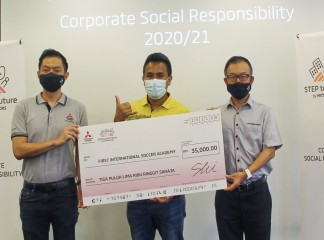