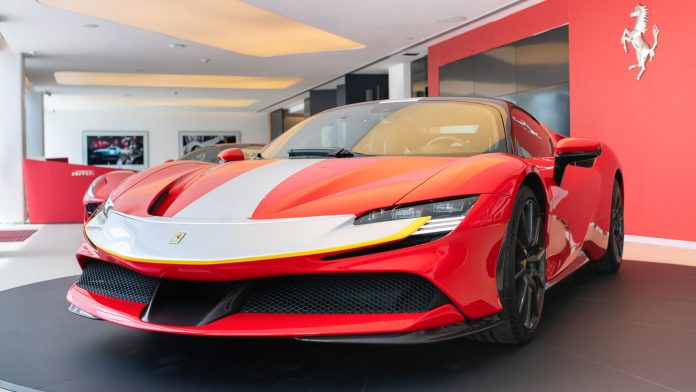 We knew the Ferrari SF90 Stradale, with 1,000 hp from its hybrid powertrain, will be fast – but not for a moment did we think that the series-production model will be this much faster than the limited-production king-of-the-hill LaFerrari, let alone set a brand-new record at the Top Gear test track.

The first episode of show’s 29th season, which premiered over the weekend, featured the Ferrari SF90 Stradale setting a lap time of 1:11.3 around the iconic Top Gear test track. Even in the capable hands of The Stig (which admittedly is played by multiple racing drivers), the SF90 Stradale looked like a handful to tame – watch the full lap in the video below, and don’t worry because it won’t take long.

For context, the previous lap record was held by the Ferrari 488 Pista, with a time of 1:12.7 – that’s a 1.4 seconds gain from the previous best result. The limited-production LaFerrari of the affectionately-named “Holy Trinity” meanwhile, “only” managed a time of 1:14.2, though it should be noted that it was an “unofficial” run on a slightly damp track, and not driven by The Stig.

In the episode, show host and automotive journalist Chris Harris also noted that the SF90 Stradale was so fast that The Stig had to lift for the Follow Through corner, where it is usually taken flat out in most other cars. The 0-100 km/h time of 2.5 seconds, when viewed from the side at the starting line, almost felt like the footage was sped up.

The latest series-production hypercar to come out of Maranello is powered by a 4.0-litre twin-turbocharged V8, the most powerful Ferrari has ever made, itself making 780 hp and 800 Nm of torque. Pair that to a pair of electric motor – one between the engine and the eight-speed dual-clutch transmission and one on the front axle – and you’ll get this 1,000 hp road-going missile that anyone with enough money can buy.

And if you do have that kind of money and want to experience the speed by yourself, then great news – because the Ferrari SF90 Stradale was recently launched in Malaysia, starting at RM1.9 million before option, duties, taxes, and other on-the-road costs.