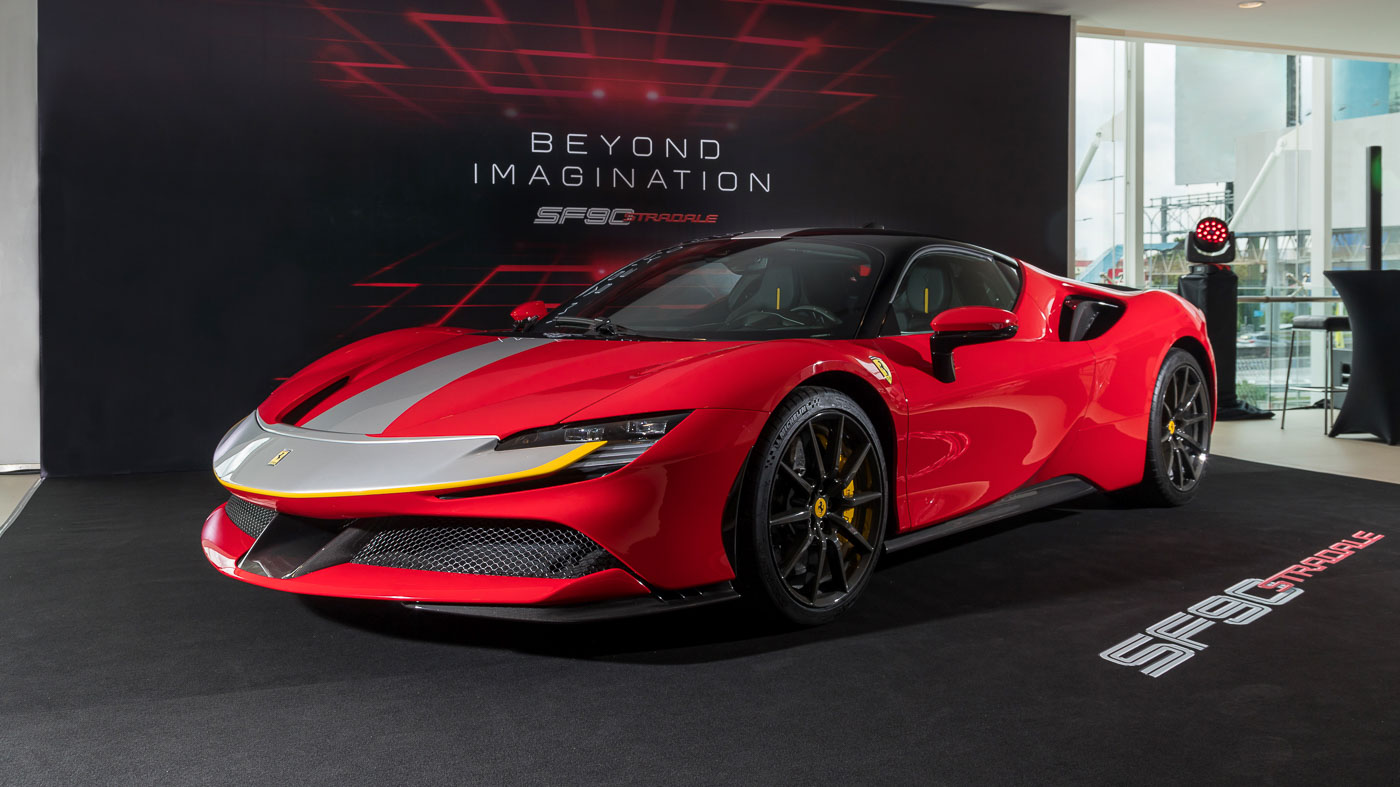 In conjunction with the opening of the Revamped Ferrari Petaling Jaya showroom, Naza Italia has officially launched the Ferrari SF90 Stradale here in Malaysia today. Pricing starts at RM1,908,000 before tax, duties, and options.

The Ferrari SF90 Stradale is the Prancing Horse’s first series-production plug-in hybrid vehicle (PHEV), and will lead the charge towards a new chapter in the Italian supercar maker’s history.

Powering one of Ferrari’s most important car in recent times is a 4.0-litre turbocharged 90-degree V8 engine, paired to three electric motors – one at the rear axle located between the engine and the eight-speed dual-clutch transmission, and two on the front axle forming the RAC-e torque vectoring system, or “electronic cornering set-up regulator”.

As a whole, the system produces a whopping 1,000 hp but the internal-combustion engine is also as impressive by itself, producing 780 hp and 800 Nm of torque – making it Ferrari’s most powerful V8 engine ever made, and the first time in the Italian supercar maker’s history that a V8 engine is used on a top-of-the-range model.

Thanks to an obsessive weight management during the car’s designing process, the Ferrari SF90 Stradale achieves a weight-to-power ratio of 1.57 kg/hp. Pair that to the all-wheel driven nature of the drivetrain, and the SF90 propels to 100 km/h from a standstill in just 2.5 seconds, and 200 km/h in just 6.7 seconds, onward to a top speed of 340 km/h.

With a powertrain that is capable of generating temperatures of nearly 900-degree Celcius during hard driving situations, a significant portion of the exterior design has been focused on managing aerodynamic flows, especially on the radiating masses within the car.

Particularly, the stream of hot air coming out of the radiators in front are channelled along the sides of the underbody instead of the flanks, therefore ensuring that the air entering the side air intakes ahead of the rear wheel arch is as cool as possible, boosting the efficiency of the intercooler radiators.

The brake callipers, developed in close collaboration with Brembo, also feature aerodynamic appendages to distribute airflow from the special air intake under the headlights to more officially cool the brake pads and discs. Meanwhile, rear brakes are cooled by air flowing in from two air intakes underneath the body.

One key innovation in this area is the new shut-off Gurney, a patented active system located within the rear wing which regulates the airflow over the upper body, reducing drag at high speeds with low lateral dynamics, while increasing downforce during corners, under braking, and change of directions.

The 20-inch forged wheels are also designed specifically to act as wing profiles, with a geometry that manages the flows inside the wheel arch, generating extra downforce at the front axle. Ferrari claims that overall, the SF90 Stradale is capable of generating up to 390 kg of downforce at 250 km/h.

From a stylistic point of view, the design of the SF90 Stradale is also a significant departure from the classic mid-rear-engined sports berlinetta proportions that was introduced on the 360 Modena some twenty years ago. Instead, it takes inspiration from the brand’s recent supercars, such as a smaller front section and more forward position of the cockpit to reduce drag without impacting on-board comfort.

The cabin of the Ferrari SF90 Stradale is also a huge paradigm shift compared to the brand’s previous models, with a significant focus placed on the brand’s new track-derived “eyes on the road, hands on the wheel” philosophy.

Just like the Ferrari Roma (introduced globally later than the SF90, but launched earlier in Malaysia), there’s a new steering wheel packed with haptic touch buttons, allowing the driver to control virtually every aspect of the car using just their thumbs.

Right behind it is the new 16-inch curved digital instrument cluster which, as expected, can be fully controlled via the touchpads and haptic buttons on the steering wheel. There’s no central infotainment display here, except for a small screen for you to scare the passenger with the speedometer display.

The automatic gear selector on the centre console is also inspired by a manual gearbox lever gate, which Ferrari justifies as the “past and present skilfully merging to point the new Ferrari towards the future”.

The Ferrari SF90 Stradale in Malaysia is priced starting from RM1,908,000 before taxes, duties, insurance, and customisation options. For the first time on a Ferrari, buyers can also choose between the standard car and a more sports-oriented specification – the Assetto Fiorano.

The Assetto Fiorano also includes Michelin Pilot Sport Cup2 tires as standard for extreme on-track performance, thanks to a softer compound and fewer grooves than the tyres fitted on the standard variant.