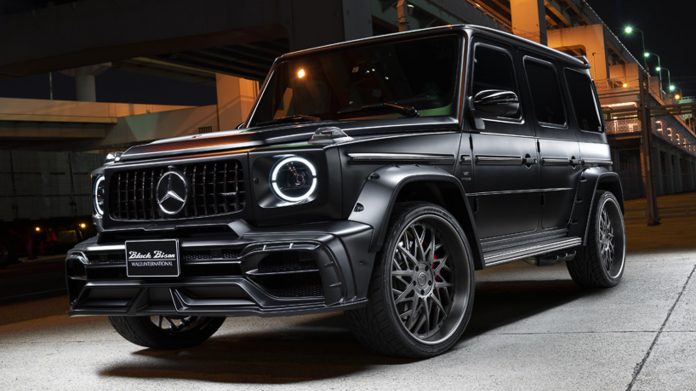 Today’s a day for big SUVs. You’ve seen the sleek BMW X7 dressed in an M Sport kit and finished in Ametrin Metallic paint earlier but we’re now visiting the darker side – the far end of the SUV spectrum – from elegant and sporty to cynical and downright intimidating.

We have here the latest version of the G63 AMG, which was launched in Malaysia and reviewed over a year ago, but it has gone under the knife in the hands of WALD – a Japanese tuning company that was established in the 1990 – known for their pompous and bizarre body kits. Their portfolio simply sparks envy – catering to the likes of Lamborghini, Rolls-Royce, BMW, Porsche, Audi, Maserati, Toyota and even Suzuki which interestingly, is called the Black Bison too.

Right away, you can tell that there are two variations in this “Black Bison” series – an iconic series nameplate that WALD has retained from past G63s it has meddled with over the years.

Making up the Black Bison kit is a front bumper with more vents than a laboratory, a rear bumper with diffusers and an integrated brake light much like the one on the new Toyota Supra. It also gets more aggressive wheel arches, a roof spoiler and triple exhaust tips on the side-exit exhaust – triple exit! As a result the Black Bison looks like the imaginative drawing of every 7 year old’s dream war machine.

But the similarities between the two (black and white) end there. One sports a vertical “Panamericana-like” grille while in the white G63, they’re horizontal slates, much like the twin-louvre look of AMG-inspired Mercedes’. Not only that, the latter G63 also gets an unnecessarily bulky and elaborate front bonnet but we’ll forgive them, in the name of being different.

Contradictory to that, WALD said exactly this. “There is a design policy of WALD to keep pursuing the design to which ultimate simplicity and tiredness never come. The status which you look for will be certainly found in the ultimate simple design.”

Forgive Google’s wonky translation but you get the gist.

WALD also said the design of the G63’s body kit was curated to cater to the “big demand” of its VIP and celebrity owners and nothing screams fabulous more than a jacked-up ride height and chunky off-road tyres wrapping the massive multi-piece Illima forged wheels.