Home News This is the craziest (and quietest) Porsche “911” ever! 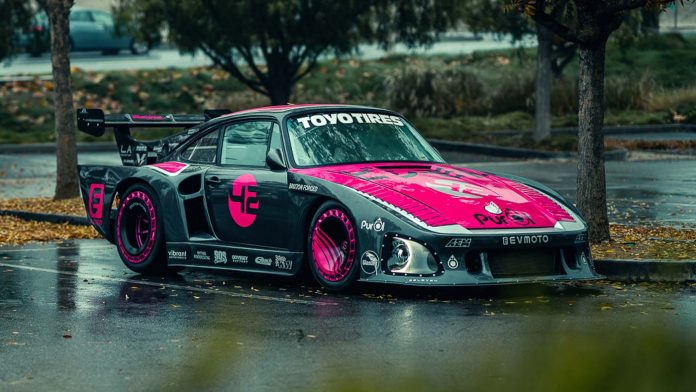 In case you’ve not heard or come to know this name, Bisimoto Engineering is synonymous with bizarre and madness. In fact the company founded by Bisi Ezerioha, was built on unusual, bizarre projects that rewrites the rule book.

The company rose to prominence and fame with a few notoriously powerful projects in the past – a 1,000 Honda Odyssey, an 850 hp Porsche 911 Turbo and now their latest projects, according to Bisi, is the middle ground between the old and new world.

It’s called the Porsche 935 K3V – in essence a standard 1984 Porsche 911 SC that’s been unconventionally modified both aesthetically and mechanically.

On the outside, it has received a complete makeover with a fibre glass body kit and extensions inspired by the Porsche 935 and has been (literally) amped-up with Tesla’s electric motors. Without an internal combustion engine, the massive air ducts at the rear fenders are used to cool the batteries instead.

There are only two running gears in the 935 K3V – one to move forward and the other to reverse. Unlike most electric cars, the original gear lever was retained for this operation.

The 17-inch front/19-inch rear wheels are a tribute to the Porsche 935/78 Le Mans race car from the 1970s while the 3D-printed wheel caps are a nod to the Formula race cars from Formula E. These decadent items are wrapped in Toyo Proxes RR competition tyres. Behind them are Stoptech brakes with what seems like a 6-pot pair in the front.

According to Bisi, there’s hardly any opportunities to use the brakes when travelling at low speeds as the regenerative braking system is capable of slowing the car down significantly, much like the system in the new Nissan Leaf available in Malaysia.

With the spike in interest from the younger generation on vintage cars, if this is the way forward. There’s no doubt most would be inclined to jump on the electric bandwagon. Heck, it might even persuade the old thick skulls to make this transition.

With that level of performance and efficiency, would the lack of noise and drama still deter you from electric cars? Let us know your thoughts in the comment section!