Home News This Toyota Hilux with an AMG V8 is something we never knew... Remember the W204 version of the Mercedes-Benz C63 AMG? The one famously known for having an enormous M156 6.3-litre V8 engine wedged in the front, powering only the rear wheels?

Strapped with the first ever engine built by the Mercedes-Benz’s AMG subsidiary, it had the acceleration qualities of a missile and would not think twice about throwing you sideways in an instant if your talent dries up behind the wheel.

Now someone in South Africa has decided to jam the same M156 V8 engine with anywhere between 475 hp to 518 hp (depending on model) and up to 600 Nm, into an unassuming Toyota Hilux – for a potent shot of acceleration at the slightest flex of his right toe.

The bigger surprise is that the V8 is mated to a manual, and a quick check affirmed that the W204 C63 never had a manual option. Not much is known beyond that except that this Frankenstein is also daily-driven.

With that noise, why the heck not? This Toyota Hilux has an AMG 6.3-litre V8 engine inside! 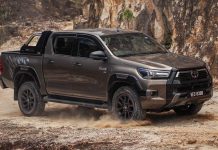 Toyota allows farmers in Brazil to buy the Hilux with corn and soybeans!