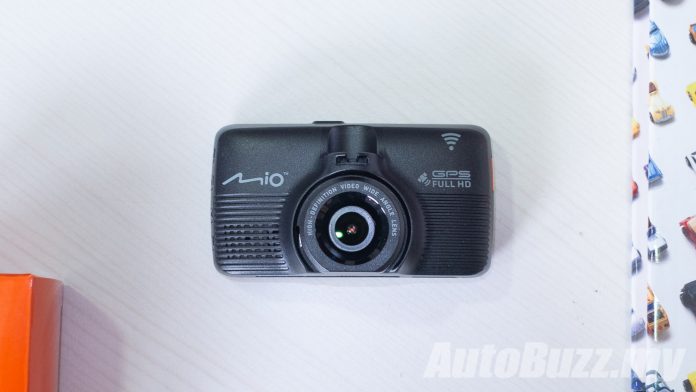 Dashboard cameras, or dashcams, have almost become a necessity for daily commuters, as law-breakers are becoming more rampant on the road these days. Heck, there are even various Facebook pages dedicated in share video clips of these local road offenders.

When there’s demand, you’ll be sure that there will be supply as well – dashcams have flooded the market in all forms, sizes and price. Mio, having just entered the Malaysian market, is here to take on the big boys with its top-of-the-line MiVue 792. But a pretty hefty price tag of RM799, does it have what it takes to justify its asking price?

The Mio MiVue 792 comes in an orange box made of thick paper stock. Inside, we have the dashcam unit itself, alongside a Mini USB power cable, windscreen mount with swivel ball joint, a 16 GB microSD memory card as well as a quick start guide.

On first glance, there are already a couple of things we aren’t too fond of – the USB power cable (on the 12V power adapter) is fixed and not removable, and there are no additional USB slots on the adapter as well; additionally, the set does not come with a windscreen protective film for the adhesive mount, so that can potentially foul the tint when removing – but we digress.

The design of the MiVue 792 is discreet, with the majority of its body made up of black plastic. Although the looks of the MiVue 792 is not a knock-out, the weightiness of the device gave us a feeling of robustness – it feels as if it can take a beating, especially under the harsh Malaysian weather.

A large 2.7-inch LCD screen dominates the rear side of the device, which displays the video feed and other information. While not particularly high in resolution, the size of the screen definitely made navigating through the menus a lot easier, which is executed through physical buttons on the device.

Beside the screen is an orange Event Button, which starts saving a 15-seconds long (including 5 seconds before the button press) video when you press it. More on this later.

Moving to the side of the device, four unlabelled buttons make up the main navigation soft key buttons, with its actions shown on the right side of the screen.

Setting up the MiVue 792 is straightforward and simple, especially with the device automatically obtaining the GPS time during set-up. The 3-meter long power cable makes routing and concealing a piece of cake, though if this sounds too daunting to you, you can always make use of the free installation service available in the Klang Valley.

The Mio MiVue 792 records at a maximum resolution of 1080p at 60 frames per second (fps), though it is set to 30 fps by default. For a dashcam at this price, we would have hoped for a video feed that resolves details better – which would come in handy when you need to zoom in for a clearer view.

Image quality from the dashcam is just about average during the daytime. On the move, the dashcam sometimes struggles to capture a clear image of the number plate ahead, even when it’s just at a car’s length away.

At night, the MiVue 792 fares slightly better, thanks to the Sony Starvis IMX291 sensor. Colours are vibrant, and details are well kept even in dimly lit situations. That said, chromatic aberration does seem quite apparent on bright and contrasty areas – such as number plates.

Dive into the settings menu, and you’ll see where the MiVue 792 truly shines. The inconspicuous dashcam is jam-packed with features that can even make some luxury vehicles drool with envy – though the long list of features in the menu also makes it slightly intimidating for the regular user.

Of course, as an aftermarket solution, certain features don’t work as well as the OEM-developed ones. For example, the lane departure warning system makes a loud noise whenever we switched lanes, even with the indicators on – we switched this feature off as the alerts started to annoy.

The MiVue 792 also comes with a traffic enforcement camera warning feature, thanks to the built-in GPS receiver. The camera database is available for download from Mio’s website, but the information cannot be edited by the user. In our experience, most cameras – including traffic light cameras – have been mapped, in the Klang Valley at least.

As far as dashcam mobile applications go, the MiVue application is one of the simplest and most straightforward dashcam applications we have used in a while – and that’s not a bad thing.

Using the built-in WiFi connectivity on the MiVue 792, videos are transferred pretty quickly from device to phone, and we have not experienced any connectivity issues thus far – something we cannot say for many other dashcams.

Once connected, the MiVue application automatically downloads all “Event” videos – either those saved via the Event Button, or automatically recorded from activation of the G-force sensor. The instantaneous process makes sharing of video clips quick and direct.

Mio also provides a MiVue Manager application for your PC, which allows you to view recordings in more detail. The application lists your videos based on the recorded date, and shows information such as G-forces, speed, and even a plotted map of your drive.

The Mio MiVue 792 excels in its versatility, thanks to the extra features it packs. However at a price point of RM799, it gets a tad bit harder to recommend, as it leaves something to be desired in its core functionality – being a competent third eye on the road.

Although, if you’re looking for something more than just a basic video camera, the driver’s assistance features, as well as the front-and-back recording capability (with an additional camera, sold separately) does make the MiVue 792 a compelling package.