Home News BMW plans to introduce an M model for the 1-series to challenge... It’s been seven years since we got an M model for the 1-series (the 135i xDrive doesn’t count) with the last being the 1M back in 2012 which raised hell and hairs of everyone who got to drive it.

With a 3.0-litre twin-turbo straight-six engine, it was compact, balanced, fast and most importantly, fun. It had around 340 hp, 450 Nm and a sweet 6-speed manual gearbox.

But that seems to have been a thing of the past. Since then Mercedes-Benz has reigned supreme with their corner-carving A45 AMGs which were effortlessly quick and highly accomplished through the bends.

Recently, to further cement their position, the three-pointed announced that the next A45 AMG will be equipped with the most powerful turbocharged 4-cylinder engine in production – making 416 hp (up 40 hp from before) and 500 Nm (up 26 Nm) of torque.

According to international reports, BMW will be responding to that with a new M-model for the latest 1-series but with a twist. It will be all-wheel drive instead of rear-wheel drive, to bring the fight to Audi’s RS3 and Mercedes-Benz’ A45 AMG.

Focus will not only be on the 1-series as BMW will also be planning an assault on the performance car game with the new M3 and M4, as well as a new M2 CS.

Last week, BMW unveiled the Vision M NEXT, a hybrid concept that signals the new direction of the next generation BMW hybrid sportscars. 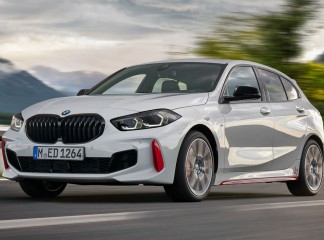