Aside from the Ford Ranger, I honestly can’t think of another pick-up from the vast variety available in Malaysia that can be compared to the new Mitsubishi Triton.

While we may not have featured the Hilux in the video, we actually had one as a tracking vehicle and the difference, especially in ergonomics, between the two is startling.

As such, only the Ranger stands out, alongside the Triton, with a family-friendly passenger car-like cabin. Even so, the Triton has something even the Ranger does not offer – rear air vents on the headlining – which vastly changes the experience of being in the back seat.

Speaking of which, the angle of the rear seats, although said to have been improved from before, does not offer a profound difference from the model before or even compared to the Hilux we had for the shoot.

For a closer look at what the Triton offers, throughout the different variants, check out the video above! 30% off on Mitsubishi spare parts for flood-affected customers 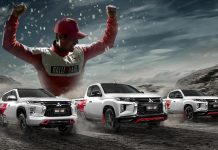