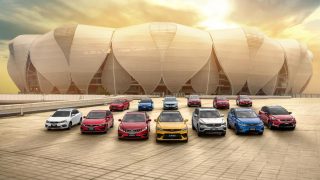 Geely mobilise global resources in support of battle against CoronaVirus

Mitsubishi extends the model life of the ASX with a third makeover! It is not uncommon to for a vehicle model to undergo multiple updates to keep it fresh and ‘competitive’, as the industry would like to term it. But as the Mitsubishi ASX enters its tenth year of service, one would imagine that Mitsubishi Motors Corporation’s attention would’ve been focused on the similarly sized Eclipse Cross instead of something of this vintage.

Well, MMC went on and did it anyway and gave the ASX the full ‘dynamic shield’ treatment with a front end that looks dramatically different, not unlike what transpired with the newly updated Mitsubishi Triton, and more so to the eye since the locally assembled version sold in Malaysia never adopted the second facelift styling.

The rear three-quarter is however more recognisable, even then the new bumper and tail-lamps (with Thor hammer-like illumination bars) do a convincing job aesthetically speaking. Mitsubishi is seemingly on a good streak with this new styling language, as CVP of Design Tsunehiro Kunimoto expounds on the ‘Impact and Impulse’ design concept of the revised ASX in the behind-the-scene interview below.

And while some may lament the age of the underpinnings and mechanicals of the ASX – the MIVEC 2.0-litre 4-cylinder-cum-CVT powertrain will likely remain unchanged, this restyling job does look sharp and eye-catching. Sadly, the makeover on the inside isn’t as extensive as the outside; the more noticeable items being the infotainment system which now has a tablet-style 8-inch touchscreen and new trim on some touch points.

So, what do you think? Should Mitsubishi Motors Malaysia introduce this? Would you have this over a Honda HR-V and Subaru XV?