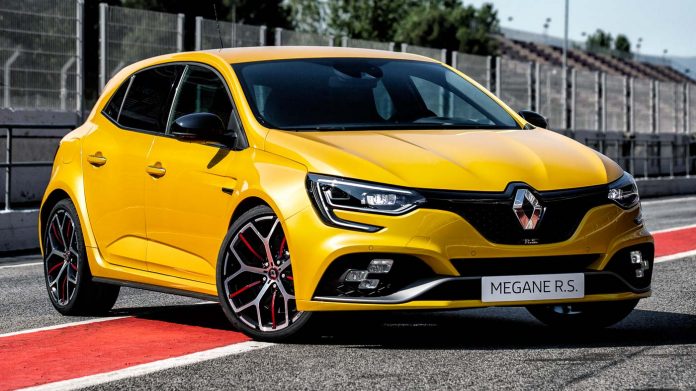 Renault Sport has spawned a hotter, Trophy version of the fourth-generation Megane R.S. with more power, reduced unsprung weight and beefier brakes. Fret not enthusiasts for the most powerful Renault Sport production car can still be had with a six-speed manual.

Its 1.8-litre turbocharged four-cylinder petrol engine found in the standard Megane R.S. now commands 300 hp and 420 Nm, 20 more horses and torque over the standard car. An EDC dual clutch or manual gearbox, both with six forward ratios, is tasked to send drive to the front axles. However, if you choose to have three pedals and row through the gears yourself, torque figure is capped at 400 Nm due to the transmission mapping.

The increased power comes from a new ceramic ball bearing system for the turbo and a variable valve exhaust system. The new innovations improve the engine’s responsiveness and acceleration at higher revs. Century sprint is now done in 5.7 seconds.

With the new exhaust system that comes with an electronically controlled valve works according to the Multi-Sense mode (drive modes) selected. When the valve is shut, the tone is noticeably sportier than the standard exhaust system and when it is open, the reduced flow resistance allows for maximum performance and noise.

The Megane R.S. Trophy is equipped with the Cup chassis as standard which adds A Torsen® mechanical limited slip differential, 25 per cent firmer shock absorbers, 30 per cent tighter springs and 10 per cent stiffer anti-roll bars. It also has the 4CONTROL all-wheel steering technology as standard.

It is difficult to distinguish the Megane R.S. Trophy apart from the standard car with new items include larger 355 mm front brake discs with red painted Brembo calipers, 19-inch ‘Jerez’ alloy wheels and TROPHY stripes added to the F1-style blade. An optional 19-inch ‘Fuji’ lightweight alloys that reduce unsprung weight by 8 kg will be available at a later date. The Trophy gets optional Recaro seats that allow the driver to adjust the seating position 20 mm lower for a racier feel.