Here it is ladies and gentlemen, the latest Evolution from Mitsubishi in its full glory. Yes, the legendary Evo nameplate now rests on an SUV that runs on pure electric power. Officially called the e-Evolution Concept, the concept car incorporates two of Mitsubishis strength – SUV and EV.

Adopting a design philosophy of “Robust & Ingenious”, the e-Evolution wears the latest illustration of Mitsubishi’s Dynamic Shield family face. The SUV boasts high-ground clearance, short overhangs, strong shoulders with narrow hips at the rear, giving it a sense of nimbleness and agility. The protruding tyres on the other hand shows off its powerful 4WD traction. At the rear, the roofline tapers down significantly from the C-pillar onwards for superior aerodynamics.

Inside, the cockpit of the e-Evolution gives us a glimpse of interior designs of the future when the traditional firewall is done away. The floating display on the dashboard displays all the essential information for the occupants while the steering wheel and centre console were designed for a feeling akin to a jet fighter.

Motivation is courtesy of three electric motors – one on the front axle, two at the rear. The dual motor features Dual-Motor Active Yaw Control (AYC) system that acts as an electronic controlled torque-vectoring system for greater traction on all conditions. All these are integrated into Mitsubishis famous Super All-Wheel Control (S-AWC) 4WD system to greatly improve the SUVs handling and traction.

Brakes are no longer hydraulically operated on the e-Evolution Concept, in its place is a set of electric callipers that faithfully mirrors the driver’s inputs and electronically clamps the rotors for stopping power.

The AI System in the e-Evolution Concept consists of an array of sensor to instantly read changes in road, traffic conditions as well as driver’s intent; coordinating the vehicles dynamics accordingly for superior driving experience. The “Coaching Function”, as Mitsubishi coins it, builds a profile of the driver’s skill level and subsequently formulates a training program that provides advice through voice prompts and the large dashboard display, ultimately helping the drivers to enjoy the vehicle to an even greater degree. 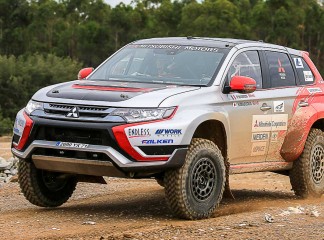 Mitsubishi is bringing back the Ralliart name and re-entering motorsports