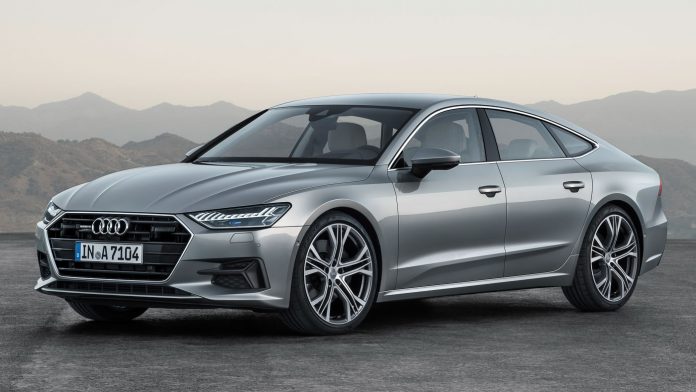 Following the global debut of the all-new Audi A8, the four-rings pulled off the wraps to the second-generation A7 Sportback. Unveiled at the new Audi Design Centre in Ingolstadt, you know that Audi is trying to highlight the A7s new design.

Measuring at 4,969 mm in length, 1,908 mm in width, 1,422 mm in height and 2,926 mm in wheelbase, Audi has shortened its overall length (-5 mm) and width (-2 mm) compared to the model it replaces. Wheelbase has swelled by 12 mm and it sits taller by 2 mm. Boot space remains at 535 litres (1,390 litres with the rear seats folded), but Audi claims that they have freed up 21 mm more interior space, giving rear passengers more kneeroom and headroom.

Like the A8, the new A7 was inspired by the Prologue Concept. While the A8 gets a more matured and sophisticated look for the big bosses, the A7 stands for “pure progressive”. Every element of its design has been taken to the most extreme wherever possible. Long bonnet, short overhangs and dynamic roofline all give the A7 a lean but elegant look.

The Singleframe grille, while familiar, sits wider and lower to give off a decidedly sportier vibe. Headlamps come in three options – standard LED, Matrix LED and Matrix LED with Audi laser light while wheel option extends to 21-inch in size.

On the outgoing model, its third-brake light was a high mounted unit that extends across the rear windscreen much like a Bentley Continental GT. This round, the designers have integrated the stop light right in the rear boot lid, connecting the two LED taillamps.

As standard, the A7 is available in 15 exterior shades, eight of which are new additions to the A7 colour palette. Of course, if you’re feeling a little fancy, you can always fly to Audi Neckarsulm plant in Germany where the A7 is made, and have a fully customised paint finish of your choice.

The designers have carried over several values from the Prologue show car but there is one design theme in particular that was given utmost priority – reduction as a design tool. The result is a minimalistic but highly intuitive cabin.

Like the A8, three screens dominate the dashboard of the A7: a 12.3-inch Audi virtual cockpit instrument cluster, 10.1-inch upper MMI display and an 8.6-inch lower display for main vehicle controls. While most key functions of the car going digital, Audi have invested in developing haptic and acoustic feedback that simulate the “click” feeling the four-rings are famous for.

New to the range topping A7 are the multi-adjustable, customised contour front seats with ventilation and massage. Other options on the A7 include air quality package with air perfume and ioniser, panoramic sunroof, powered tailgate, heated windscreen and others.

At launch, the A7 is available in a sole 3.0-litre turbocharged V6 TFSI packing 335 hp and 500 Nm of torque mated to a seven-speed S Tronic dual-clutch box. Drive is handled by the Quattro drivetrain allowing the A7 to sprint from 0 to 100 km/h in 5.3 seconds with a limited top speed of 250 km/h. Other four- and six-cylinder petrol and diesel engines will roll out in the near future.

Depending on options the A7 will ride on one of four different suspension setups: standard, sport (-10 mm ride height), electronically controlled dampers and air suspension. All-wheel steering can be had as an option too, allowing the rear wheels to turn a maximum of five degrees to improve low speed manoeuvrability and high-speed stability. In low speeds, the all-wheel steering reduces the turning circle at full lock by 1.1 metres. Audi also recommends having the Sport differential to go with the all-wheel steering.

Audi has also fitted a 48-volt primary electrical system (the same system as the A8) to the A7 to reduce fuel consumption by up to 0.7 litres per 100 km.

Audi is officially bringing the Audi AI system to the A7 in 2018 which allows the A7 to park itself into a designated carpark without a driver via the myAudi app. Depending on the equipment level, there can be as many as five radar sensors, five cameras, 12 ultrasonic sensors and a laser scanner to ensure the A7 does not run into anything or anyone while navigating in and out of a parking space.

In addition to the Audi AI systems, the new A7 features a total of 39 driver assistance system such as Adaptive Driving Assistant (ADA), Adaptive Cruise Control (ACC) and Traffic Jam Assist.

Prices start from £56,000 (RM310k) and considering that Audi Malaysia has the previous gen A7 on sale, it is only a matter of time before the A7 makes its way here.