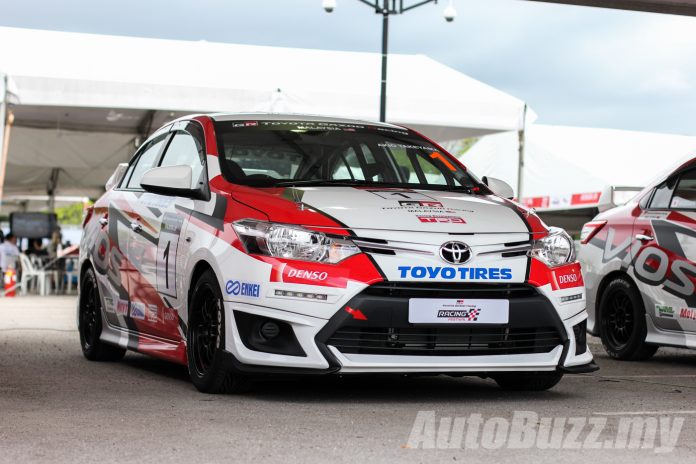 To call the recently concluded Toyota Gazoo Racing (TGR) Festival a success would’ve been an understatement. Held over last Saturday and Sunday at Stadium Batu Kawan in Bukit Tambun, a staggering 28,000 people showed up; braving the heat and rain to witness the race, festivities and most importantly, meet their revered local celebrities.

These local celebrities included drift extraordinaire Tengku Djan, Danny Koo, Geraldine Gan, Venice Min, Shukri Yahaya, Diana Danielle, Janna Nick, Geraldine Gan and beat-boxer Shawn Lee – most of whom, including drivers in the other categories, were participating in motorsports for the first time.

It was an utter fanfare. Among the highlights were the convoy of Toyota AE86’s, celebrity meet-and-greet sessions, stage shows, drift exhibitions and the very first appearance of the Toyota C-HR in the northern region.

The races were segmented to three categories where the celebs raced against each other in the Promotional category, while the bigger boys meddled about in the Sporting and Super Sporting categories. Not only did the narrow 1.65 km track limited overtaking opportunities, the rain that went on for hours made track conditions even more challenging and slippery for the drivers.

The first race involving 16 cars from the Sporting category saw the top three from qualifying retaining their positions at the end of the 16-lap race with Ken Foo coming in first followed by Brendon Lim and Patrick Tam. It was not without incident though, as Teoh Khai Lin nudged into Eric Yong of Team Dream Chaser in 4th place, sending him to the barriers.

In the Promotional category, first place was held by Shawn Lee, followed by Shukri Yahaya and Danny Koo. Having clipped a kerb and deflated one of her tyres, Venice Min unfortunately nudged onto Janna Nick and into the barriers causing both to retire from the race. Fattah Amin too had to retire from a broken rim after a tussle with Shukri Yahaya, awarding Danny Koo, who finished 12 seconds behind the leading duo, the last spot on the podium.

Day Two got off to a very bright start, literally; with clear blue skies and extremely humid conditions. Having gone through a very wet first day, temperatures rose as the drivers from the Super Sporting category lined up for the first (dry)race of the two day race festival.

With conducive racing conditions, it was full-throttle from the get go with Tengku Djan taking home the chequered flag after 18 laps; opening up a 15 second gap from second place Mark Darwin  followed by Syafiq Ali who finished in third. The race saw another precious rim (lightweight ENKEI RPF1’s) casualty as early favourite James Verappan clipped the wall.

The second race of the day was won by Shawn Lee in the Promotional category after 18 laps, followed by Shukri Yahaya and Danny Koo, a deja vu result from the day before. Having fought closely with TRD Asia’s Masaaki Murata in the middle of the pack, Fattah Amin’s misfortune continued as he attempted a brave overtaking maneuver on fourth place Diana Danielle only to send both into the barriers and retirement.

The third race saw the boys picking up from where they left off on Day One – in Race Two of the Sporting category in a closely contested, highly intense race. So stiff was the competition that drivers were lapping within a second from each other. The race ended with Ken Foo once again taking first place followed by first time podium finisher, Kenneth Koh and Brendon Lim in third.

Having trailed Ken Foo closely throughout the race, a last ditch attempt by Patrick Tam on the outside line resulted into a slide towards the barricades and eventual retirement.

The final race was another follow up from day one – Race 2 of the Super Sporting category. Having won Race One, Tengku Djan had to make do with a 20 kg ballast in his car from third place but it did not seem to have hindered his performance on the track. Diving into the first turn on Mark Darwin, Djan immediately moved up to second in pursuit of Shafiq Ali.

Having got close to Shafiq before a turn, Djan pulled out alongside him in the straights as Shafiq stayed on the inside line. Upon approaching the next turn, contact between the two sent Djan into a half spin or as the motoring writers jokingly regarded as “a controlled powerslide by Djan”. After recovering from the half spin, the rest was history as Djan went on to claim first place with Mark Darwin in second followed by William Ho after 18 laps in the blistering heat.

Unfortunately for me and the rest of us motoring media reps, there was no such thing as witnessing the race on the stands. Nor even on YouTube, in the comforts of an air-conditioned room as most of our time was spent behind the lens and under the scorching sun. At the same time, being so close to the action actually showed us what the drivers had to go through – unpredictable weather and track conditions, extremely close shaves with the barricades and a whole lot of bumper to bumper action – all the ingredients that make for an extremely exciting race.

And seeing what a tremendous event the Toyota Gazoo Racing Festival has been over the weekend for both drivers and spectators, we’ll be surprised if the next leg, held in MAEPS, Serdang on the 25th and 26th of November 2017 doesn’t spark an even bigger and more explosive occasion.