Malaysians seem to have an unfounded obsession with “fresh tyres”, constantly hunting down tyres with the most recent date of manufacturing, believing that the fresher the tyres, the better they perform. However, Michelin Malaysia is here to debunk this myth with its “Tyres Are Not Bananas’” campaign.

Unlike bananas, tyres does not have an extremely limited shelf life. In fact, the countdown on the life of the tyre starts only from the date of fitment. When the tyres are properly stored, the rubbers are only subjected to the minor temperature fluctuations of the storage facility which has negligible to no effect whatsoever on the tyre’s performance.

In a tyre wear test conducted by the Korean Department of Customer Protection comparing a brand new tyre and a three-year old unused tyre yielded no difference in performance. Both tyres that underwent high-speed and stepped speed test also showed identical tyre wear.

In a test conducted by ADAC, the German motorist organisation revealed that rolling resistance on newly manufactured tyres and unused three-year old tyres were identical. In another study conducted by Osaka City University in Saudi Arabia, a 10-year-old unused tyre in storage showed similar rate of ageing to a tyre driven for two years. Additionally, if a tyre is stored for 20 years at 40 degrees Celsius, it would show ageing signs similar to tyres with 40,000 km mileage.

Pascal Nouvellon, Managing Director of Michelin Malaysia Sdn Bhd said, “We advocate attention on overall tyre care which includes maintenance of correct tyre pressure, proper alignment, inspection for damages and tread depth measurements.” Through this campaign, Michelin Malaysia aims to educate motorists to give focus on tyre quality and care instead of date of manufacture.

“All Michelin tyres come with a six-year warranty and we recommend that tyres older than 10 years from the date of manufacture be removed from service,” Nouvellon added.

The “Tyres Are Not Bananas” campaign runs from 12 July to 4 August 2017, and Michelin will be visiting several locations in the Klang Valley to create awareness amongst motorists. Michelin is also inviting the public to post a creative photo of themselves with bananas to stand a chance to win attractive prizes such as a set of Michelin tyres, petrol cards and exclusive Michelin merchandises. Full details of the competition can be found here. 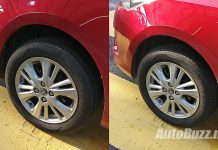 These are the dangers of driving with under-inflated tyres