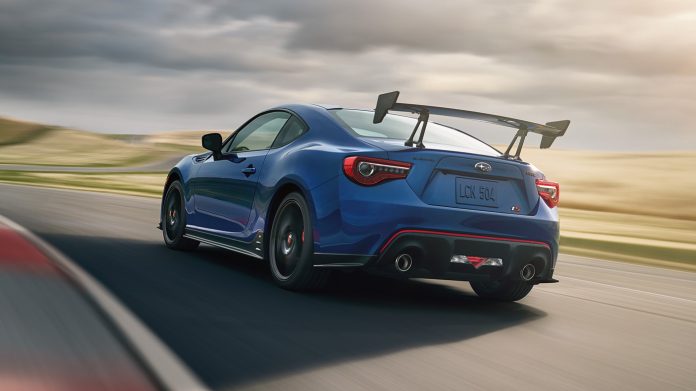 As part of Subaru America’s 50th year anniversary celebrations, they revealed not one but two specials for both the BRZ coupe and WRX sports sedan. But first, let’s take look at the Subaru BRZ tS, which sadly gets zero engine upgrades and will soldier on with its 200 hp four-pot Boxer.

For starters, the BRZ tS is not entirely new because they did in fact introduce a similar one a few years ago. The “tS” moniker actually means “tuned by STI“, and to those unfamiliar with Subaru, STI stands for Subaru Tecnica International. Subaru claims the BRZ tS delivers “the highest level of fun to drive and pure handling delight through greater flexibility, better control and stability.”

In order to achieve that, this BRZ is equipped with SACHS dampers and coil springs at all four corners, and it’s specifically tuned by STI. The chassis gets enhanced via the usage of a flexible V-brace at the engine bay, together with draw stiffeners to improve steering response. For the fist time, the BRZ gets 18-inch lightweight rims wrapped with 215/40 R 18 Michelin Pilot Sport 4 rubbers with Brembo brakes in every corner.

The Subaru BRZ tS also receives a minor body makeover, comprised of manually-adjustable carbon fibre spoiler, new front and rear diffusers and Cherry Blossom accents. The STI badges are littered inside and out.

Just like the JDM BRZ tS, this will be a limited edition version with only 500 units being commissioned. Pricing will be announced later this year with sales commencing early 2018.