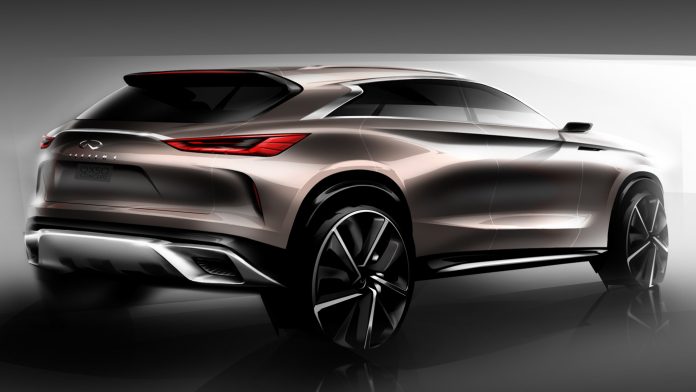 Infiniti is wasting no time at the start of 2017 by revealing to the world the first trio of pictures of their second-generation QX50 crossover. The Detroit debutant will succeed the decade-old model which is currently on sale in Malaysia from RM310k to RM380k.

The new QX50 will come with a host of semi-autonomous driving technologies such as Active Lane Control, drive-by-wire Direct Adaptive Steering (a world’s first – debuted on the Q50) and Predictive Forward Collision Warning. It doesn’t sound like much because these exact features are found in the Hyundai Ioniq.

What’s truly unique to the Infiniti is the adoption of the world’s first, production-ready VC-Turbo (Variable Compression) technology. This insanely high tech feature works exactly as it sounds: by varying compression ratios anywhere from 8:1 to 14:1.

Achieving this alone is a technological milestone, because for the first time, the pistons within the engine (in this case, a 2.0-litre four-cylinder turbo) can seamlessly raise or lower their reach. A 14:1 compression ratio in a turbocharged engine is pretty much unheard of, and as a general rule of thumb, the higher the compression, the more complete a droplet of fuel is burnt.