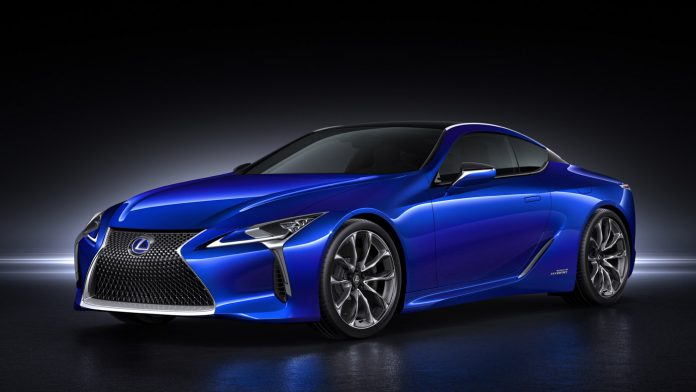 So when Lexus announced that they will be making a hybrid version of the LC, it’s natural to assume that it’d be a high-tech powerhouse. Well, we’re both right and wrong. Its 3.5-litre naturally aspirated V6 (295 hp, 348 Nm of torque) isn’t quite the performer we’d expect, but it’s coupled to a 60 hp electric motor, giving it a total system output of 354 hp. It’s not as high as the ‘500’ its name suggests, but Lexus says it’s enough to do the century dash in under 5.0 seconds. To give you some perspective, the 5.0-litre V8 LC does that in 4.5 seconds.

Let’s take our eyes off the brawn and focus on the brains. Never mind not powerful, but what this car has achieved, technologically, is something relatively unheard of, for Lexus at least. Channeling all the power to the rear wheels is the familiar e-CVT gearbox, but this parallel hybrid system (read difference between parallel vs series drivetrain here) it mated to a four-speed conventional automatic. Lexus calls it the Multi Stage Hybrid System, and here’s how they work.

The e-CVT is known to many as Toyota’s Hybrid Synergy Drive, used commonly across the Toyota and Lexus range. Within this hybrid transmission is a powerful electric motor paired to a set of planetary gears, both working in tandem to produce an infinite number of gear ratios. Computers then, depending on throttle input, decide which gear ratio is best suited for the kind of drive.

But the LC500h can’t be fun, precise and engaging with the e-CVT alone. To mitigate this without adding more weight (hypercar hybrid drivetrains are extremely intricate and complex, adds weight as well), Lexus engineers decided to marry the e-CVT gearbox to a lightweight, compact four-speed automatic. Note, the keywords here are lightweight and compact, so it doesn’t add more weight which will upset the car’s balance.

The four-speeder is positioned behind the e-CVT, and functions by giving the car actual mechanical gearshifts. This is important because without it, there won’t be the ‘M’ Mode. For the first time in a regular full hybrid Lexus vehicle, drivers can manually change gears when driving the LC500h – something its hybrid cars couldn’t have possibly done since, well, the Prius debuted back in 1997. Also, by marrying both drivetrains, Lexus says that the Multi Stage Hybrid System allows the engine’s rpm to better match hard-driving input. Imagine yourself commanding a Prius or CT200h to hold its rev at 5,000 rpm when you sweep the corners up Fraser’s Hill. You can’t, even if you tried, can you?

At this rate, if you’re still not convinced of Lexus’ ingenious formula, allow us. In short, Lexus’ Multi Stage Hybrid System weighs exactly the same as the e-CVT, despite adding the four-speed gearbox. How? The electric motor is slightly more compact and the lithium-ion battery pack is made of lighter materials to offset the mechanical gearbox. Lexus could, for all they care, slap a six-speed, eight-speed or 10-speed gearbox into the mix, but then you won’t be getting a hybrid LC Coupe now, would you?

Underpinning all that new technology is the company’s all-new GA-L (short for Global Architecture for Luxury vehicles) platform, one that will be the blueprint for all future front-engine, rear-wheel drive Lexus cars. Its layout allows the engine to be positioned just behind the front axle for optimal weight balance. Aluminium is extensively used throughout the car, primarily for the front hood, fenders and door skins. There’s no spare tyre, so all LC500h will be shod with run-flats tyres while riding on 20-inch cast aluminium or 20- and 21-inch forged aluminium alloy wheels.

More details on the LC500h will surface in a little over a week’s time, so be sure to watch this space for more updates! Meanwhile, what do you think of Lexus’ new hybrid drivetrain, dear readers?